A little over three years ago, I wrote a post called Lumpectomy Blog. Until my recurrence, when a whole new band of readers began following this blog, that piece was one of the most widely-read pieces I'd ever done. I did a decent job of explaining what it really FEELS like to have a lumpectomy--not the physical sensation of the operation, necessarily, but the whole process.

I don't think I have that in me anymore.

I don't have that much to say about the mastectomy I underwent on Wednesday. All of the feelings that I can remember so vividly from my first cancer surgery--the fear and sadness and disbelief, but really, more than anything, the fear--have just disappeared.

I feel--how can I say this?--bored in thinking about writing about my mastectomy.

Going through a mastectomy is anything but a boring process. It is a perfect shit storm of scheduling, nearly impossible decisions, preparation and recovery. It hurts like a bitch. You have these ridiculous drains to contend with, and if you're me, you are asked to pull this gargantuan wire out of your own chest a few days after the procedure, making you feel like some kind of Iron Woman for real. Moreover, no one seems too concerned about the things they used to care about after someone has a major operation under general anesthesia--no one cared if I could shit or cough or walk without feeling woozy. As long as I could get up and give myself a shower--which I did, about 18 hours post-op, hold down some food, which I did, eventually, after puking up the entire breakfast I greedily ordered the next morning, and learn to strip and empty the drains myself, easy no problem, I could go home. 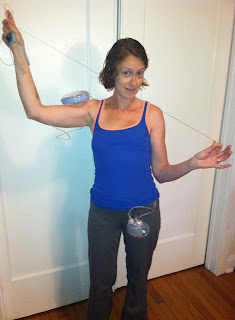 I could go home and continue to be bored within this boring nothingness of continued cancer.

Maybe I don't feel BORED exactly. Maybe I am just tired of it. I am fucking tired of cancer.

I am sitting in limbo, ready to get my drains out because they have already gotten to that point--in 4 days, not 10 to 14. I am waiting to hear my pathology on Tuesday. Waiting to go to the oncologist on Wednesday and get handed my chemo sentence, something that I just can't imagine happening at the same time that I am resigned to it happening. I have these fantasies of myself writing a blog post about avoiding chemo, wherein I commit the breast cancer sin of admitting that to me, cancer without chemo is hardly cancer (and I'm sorry, and I know that sounds bitchy, and I know that women who go through breast cancer without chemo are real cancer survivors, because I am not an idiot). Because if all I have to do is this? All I have to do is feel pain, and pain is easy, because my experience with it is that it ends, unless you die from it, all I have to do is become permanently disfigured, all I have to do is spend months trying to regain the level of physical fitness I had before this pile of shit dropped on me?

But that's probably not what is in store for me, and I know that. So, until I know exactly what I'm facing, I could and probably should sit here and tell you what it is like to have a mastectomy for a cancer recurrence, after having a lumpectomy. I could and should write about my guilt and regret over not having a mastectomy earlier, but that would just be paragraphs full of lies, especially given the number of women with triple negative breast cancer I know whom have had recurrences post-mastectomy in the skin, in the tiny bit of tissue between the implant and the chest, and in the chest wall. I could write about having this particularly aggressive, scary and misunderstood type of breast cancer, but I have done that before and I'm not sure now is the time to do it. Now is the time to write about what it is like to have a mastectomy, regardless of the situation that got you to that point. That is what I do--I tell stories; I tell people what it is like to do this. But my description of what it was like for me would not do the operation--the EXPERIENCE of mastectomy--justice.

Because I have felt such an abundance of nothing, and that is not how it is for most women, I'm sure.

I mean, look. I was apprehensive beforehand, I had trouble sleeping, I was getting fidgety when my surgery was delayed for 2 hours. I was glad that Gabe and my brother were there with me. I was unfazed by the plastic surgeon pulling my gown down and marking my breast, then signing it, so we all knew it was the right one; I saw my brother looking away. More than anything, I just wanted to get it over with, and that is the feeling that has stayed with me.

Let's get this shit done. 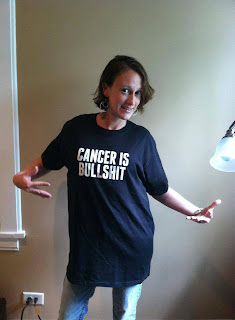 Right now, we are all fairly sure I don't have mets. So what I have is the second level of cancer, the level no one ever wants to discuss or admit exists.

Sometimes, cancer is a chronic disease, a chronic condition. Sometimes, it takes a long, long time for cancer to work its way out of your system, no matter what you do to fight it. This can happen even when cancer is not destined to kill you.

No one wants to hear this. You are supposed to fight cancer once and win. The alternative, I guess, is to "lose."

There's not a lot of language out there for those of us who just have to keep fighting, keep sacrificing bits of our healthy selves in some kind of absurd ritual to the cancer gods.

All of these milestones that I have covered so ambivalently over the last three years (the worst for me has always been Thanksgiving--am I really supposed to feel more thankful as a cancer survivor? I have always been thankful. It has always been my favorite holiday. Most times, I just skipped the Thanksgiving post and wrote something else entirely), including the supposedly-triumphant "three year cancer survivor" mark, seem even more shadowy now. The things that I lost and regained from chemo might be lost again, this time forever. I have lost my breast forever and replaced it with this strange thing that doesn't look anything like me except that it does, because now, it is me.

I should write about that--about waking up after surgery, going to the bathroom, and stripping off my gown to look at my new body. I should write about things like phantom pain, body dismorphia, sadness and anger. But I can't, because I didn't feel any of those things when I looked at myself. I saw myself, with a strange, high lump on my chest that is even with my real breast on top but maybe half the size on the bottom, with no nipple, a huge scar under the steri strips, drains hanging out of it, and blue dye that was injected into it that will probably be there for six months (I'm still peeing out the dye--placed in a last ditch effort to find my sentinel lymph node, which couldn't be found, because it turns out I only had two lymph nodes left total in the axillary area, so they were both removed--meaning that even if they are positive for cancer, no extra surgery needs to be done, because there is nothing left to take, and also meaning that my activity level can remain normal in that arm in the future, as I've been operating in a lymph-less situation for years anyway). I looked at myself, and thought,

I'm surprised I didn't say a mental WHATEVER.

This has surprised me. It surprises me because I am not HAPPY with my reconstructed breast, though I am probably happier to have it there than to have nothing, because it really will look normal in clothes, and I can see that even now, through the bruising and the swelling and all of it.

You might think that I am in denial, or that I will one day feel these things I haven't yet felt.

I've done this before--and worse, probably. When I was nine years old, I woke up and was unable to walk one day, unsure if I would ever walk again. I didn't feel angry or sad, though I was terrified, and not of not walking, but of what had happened to me and how close I was to death, that concept that suddenly became real and inevitable, right in the middle of the fall of my fourth grade year.

I remember what I thought back then.

Oh. I guess I am not a walking person anymore.

I also remember the euphoria that I felt when I made the discovery that I would be one again, that life changes, and that things can come back to you. But that elation does not, nor should it, take away from the original feeling of acceptance that many people dismiss as depression or denial.

Some people go through life never knowing what the body really IS. I have never been one of those people. I have been aware of my body, of the seemingly meaningless functions and quirks, for as long as I can remember. I know that most of you can be healthy while part of you stops working completely. I get that. That is not denial. It's just an uncomfortable truth, or maybe all truths are uncomfortable at their core. Maybe it is just hard for a society so taken with the idea of winning, so obsessed with youth and fitness, to confront the suffering and death that is waiting for all of us with nothing more than a shrug of the shoulders and the refrain here we go again.

People have been telling me how good I look since the operation. I appreciate hearing this, so don't feel the need to stop saying it, but this fact helps me prove a point. People always told me this during chemo as well. I would be standing there, bald, weighing 111 pounds, having hot flashes and morbid insomnia, wearing no makeup and some boyish clothes, and people would say damn, you look so GOOD. And I would always say thank you, even when sometimes I wanted to say, well, I don't have cancer of the FACE. But even then, I knew what people meant. They mean the same thing today. 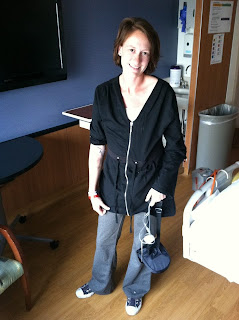 I look healthy. I look fit, and strong, and awake and alert and young and with it and all of that. And that, I suppose, is the surprise. But you know what?

I am healthy. I am fit. I am young. I am lopsided but it's not so bad.

The only thing wrong with me is this damn cancer.