My daughter is 7, and my son is 4. I would not normally include that information here because I assume that everyone who reads this knows me and my family. Normally, somewhere between 50 and 150 people read my posts, and most of those people are friends and acquaintances. There are some posts that are popular hits through google searches, but that surprises me even today. I began writing this the day after my diagnosis solely so that I would not have to answer all the questions that people would ask me in person or on the phone, and neither would my husband. And then at some point, this turned into something else. And that is how within 36 hours of publishing the post on my recurrence, more than 1,500 people had read it.

That's a new one for me. Perhaps I will find a way to thank all of these people all over the country and the world for their support, but right now I am not sure how to do that.

So, I am going to write about telling my children that I have cancer again.

A little more than three years ago, when I found out I had breast cancer, I was a 34 year old nursing mother of an 11 month old boy and a 4 year old girl. Besides the fact that people's faces would practically collapse with sadness when they learned these facts--even other, older breast cancer survivors had this reaction--one of the hardest parts of being in that demographic was that I had few people to ask for practical advice. Most women with breast cancer have older children, because they are older themselves. It is extremely rare to find out you have breast cancer when you are nursing a baby five times a day.

And so I had these questions, but there was no one to answer them. Should I tell my daughter? If so, how? I needed to wean my son, but how soon? What could I do to make the transition easier for him? How does a person balance going to work, raising a toddler and preschooler, and going through chemo-induced menopause, all at the same time? Should I freeze my eggs?

Doctors attempted to give advice, albeit badly, I will admit. Most of them advised against telling my children. They also advised me to wean immediately, though my surgery wouldn't happen for another month. I decided that this was all nonsense, and I found someone through Imerman's Angels who had also been nursing a baby when she was diagnosed. I began to ask other breast cancer survivors to dig deep into their networks and find me some people who had small children at diagnosis. Ultimately, I had completely weaned within a week, though none of us could foresee the long-term implications of that sad time. Also, everyone I spoke to who had small children when learning of their cancer--and believe me, there are not many of these people--said that I should tell my 4 year old.

But back then, she didn't know what was coming.

I planned on Friday to tell them today. So many people have asked me, how can you tell your children you have cancer? So I am going to tell you how.

My breast still hurts from the biopsy but not nearly as much, so I decided this morning that I could spin at the gym. I got up and made a single cup of coffee. I was getting ready to leave when Lenny came downstairs. I got her breakfast ready and sat down with my coffee. My mom spent the night at our house last night, but it was still just the two of us at the table. 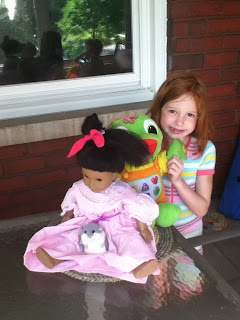 How do you tell a 7 year old you have cancer? Well, you say:

K: Hey Len I have something to tell you. Look at me. I found out that my cancer came back.
L: How did it come back?
K: I don't know, but it did. So I have to have surgery again, but this time it's going to be a bigger surgery because they need to take the whole breast. They might need to take them both; I don't know yet. And I will probably need to do chemo again, but I don't know that yet either. So you will see Meemaw here more often and probably other people, like before, and I might be bald again and sick and not be able to eat with you guys.
L: And you won't be able to cook, right?
K: Well, I was always able to cook, but being around food made me feel really sick. People brought us food, remember?
L: Yeah I remember. We lived at the old house the last time you had cancer.
K: Yeah.
Lenny points at a picture that is behind her in a frame; it is a picture of Gabe and I dressed up for a date. I'm bald.
K: I know you didn't like that last time when it happened. But then you got used to it. And it grew back.
L: Well, last time we didn't know what was going to happen, so we were worried.
K: Are you worried now?
L: No. Does everyone know? (she starts naming family members). So, Augie is the only one in the family who doesn't know? (she is smiling, reveling in another contest won).
K: For now. And I am going to be the one to tell him. Maybe you can help him understand, because he won't remember. He was too little. Do you have any questions for me?
L: No, not now.

And then I went to the gym. And I discovered it is much harder to tell adults, because they do things like cry and put their hands over their mouths and look at you with a combination of fear and sadness and disbelief. They begin the businesslike refrain of "well, what's the next step?" and look even further pained when you say that you don't know. None of this is wrong, and none of this is their fault, but it is still harder than having one of the people you have given your heart to just looking you square in the face and making you understand that this is a thing that has happened before and it's happening again, and there are other things like that, none of which make you cry.

I was eating fruit when I decided to tell my son. 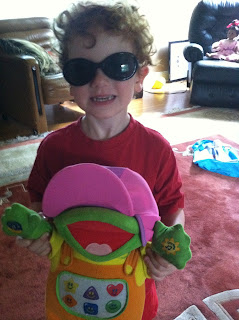 He was playing a game on the iPhone when I returned from my class. I told him to put it down and look at me. He looked at me out of the corner of his eye and tried to keep playing the game but I must have given him that mom look because then he stopped. I said, "Augie, I need to tell you something. I found out that my cancer came back." And he said this:

And it hit me that telling this kid that I have cancer is like telling a child that she is adopted. OK, so what? What is the relevance of that? Woman, you're telling me a thing that has always been true, that I have always known and I have accepted it, even though I didn't know what it meant. Does this cancer thing really MEAN anything?

His hand instinctively went up to his famous red curly hair and a tear came to his eye. "NO! I don't want you to lose your hair!"

At 4, that seems to be the hardest part, the idea of your mom having no hair. But that is only the hardest part until other hard things happen. My daughter cared when I lost my hair, but she cared a hell of a lot more when I spent 72 hours in the hospital with a temporary heart condition from chemo. And my son? Well, he has never known any different. It crushes me to know that that will no longer be the case. I was hoping one of my kids could be spared the memory of all this shit.

Clearly, we don't always get what we want in this life.

Last night I began to get angry about losing my breast or breasts. I was feeling angry not because I think breasts are vital to a happy life (though honestly, is there any other body part that people regularly lose that we would question grieving over? Just because society has decided that breasts exist as cosmetic props to ensure men's sexual satisfaction does not mean that breasts ACTUALLY serve that function, so if women grieve their loss, they should not be judged for their feelings) but rather for this reason: I don't want to have to go through something like this when I am otherwise so healthy. Maybe if I had saggy, pancake breasts, it would be different; I have perky, beautiful breasts right now. Maybe if I was old, had lived a full enough life to watch my hair turn white and my skin get wrinkled, this loss would be easier to bear. Maybe not, but the point is this. I was angry because I am too young to go through this at all, much less for the second time. 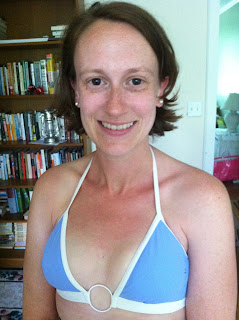 But there's nothing to do about that except know that life isn't fair, and go to bed, and try and sleep. And then, when your daughter bursts into your room at 4 am and says she had a bad dream, and normally you would feel annoyed at being woken, you ask her what it was about, and again, you envy other people with different children who have dreams about monsters and things that aren't real. She says that she had a dream that she was swimming in the lake up north and she jumped off the platform and held her breath too long and she drowned. She said this to you while lying in the bed next to your husband. You put your arm over his bare chest and rubbed her back and you wanted to cry over the fact that she had dreams about dying, but instead you said:

"Well, that's why you wear a lifejacket when you're out that deep. Plus, one of us is always with you. You wouldn't drown." And your husband chimed in, "We would save you, Lenny." And then he carried her back to bed.

Both of them went back to sleep, but you could not. Your mind was racing with thoughts about who would reassure your children and teach them things when you were gone, and those thoughts were accompanied by the simultaneously comforting and crushing realization that other people would fill that void, however imperfectly. So you cry, in your fashion, and your husband tries to make you feel better by telling you he loves you. And then your mind does you the favor of saving you, by offering you this recent memory, which shouldn't help, but of course it does.

Earlier this week, before I found out I had cancer, we were all sitting at the breakfast table getting ready for work and summer school. My son began to lament the fact that he will never be the oldest one, that he will never be the one who was born first. And I told him that was true, but that was just how it was, just like there would never be a time when I wasn't his mom, no matter how old he was. And he said:

"You won't be my mom when you die." And then Lenny chimed in:

"Yes she will. She will always be our mom, even when she's dead."

I must have given her a strange look, because then she shrugged her shoulders and said,