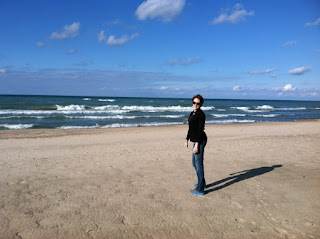 The other day, my daughter told me that she had a surprise for me from school. I assumed she had made me something in art class or that she wanted to show me a spelling test. Instead, she handed me a small pink bag with a pink ribbon pin and a small card inside of it. I asked her where that came from, and she told me her teacher gave it to her. I didn't get into it at the time, because she didn't seem like she wanted to elaborate. Today, after Gabe and I returned from a wonderful night away in Union Pier, Michigan, the following conversation ensued:

K: How did your teacher know I had cancer?
L: Because I told her.
K: Why did you tell her?
L: We watched a video about kids and adults who had cancer.
K: Wow. What did you think about kids having cancer?
L: (Shrugs). I don't know. I hadn't thought about that before the video.
K: Well it doesn't happen very often.So did your teacher ask you if you knew anyone with cancer?
L: No. When we were watching the video I was thinking about you.
K: OK, so then you told her?
L: I told her the next day. She gave me the surprise because she said she had bought presents for people in case there was anyone who had a family member with cancer.
K: That was very nice of her. Do you remember when you found out I had cancer?
L: No.
K: You don't remember anything about it?
L: I remember when you had surgery the first time. Meemaw stayed with us at our old house.
K: Were you worried about it?
L: Yes.
K: Why?
L: I didn't know what it would be like.
K: What what would be like? The surgery?
L: The whole thing.
K: Did it bother you?
L: No.
K: Nothing ever bothered you?
L: I remember when you didn't have hair. That bothered me. I liked it better when you had hair. It looks better.
K: Do you remember anything else?
L: I remember that we ordered food or other people cooked food for us a lot.
K: Right. Were you worried?
L: No.
K: I just ask because a lot of kids worry when their parent has cancer. Do you ever think about it?
L: No, I never think about it.
K: OK. So...do you not like to talk about it?
L: I don't want to talk about it.
K: Fine. Time for dinner!

Oh, how they fib, how they hide their feelings from us in order to spare us, even at six years old. I know very well that Lenny remembers almost everything about the entire ordeal of my breast cancer. She brings up random memories all the time. She still sometimes uses cancer as a measure to remember when things happened: Oh, that happened before we knew you had cancer. That happened when you were bald. We didn't go to that party that time because you had cancer.

She was the four year old who at day 25 of radiation said this to me: "Mom! Only eight left!" Because she had been counting down backwards from 33 and she had never told us that. She even correctly removed the weekend dates from the equation.

Lenny refuses to cut her hair these days and I know why. She asks me all the time when I will grow my hair out. She tries to console Augie when he gets fixated on death by bringing up my cancer, and using it as an example for how bad things can happen that don't always kill you. She will even qualify those statements with things like "well at least not right away," no matter that we have NEVER discussed cancer returning with her.

Obviously she thinks about it. She waited a day after the video, cornered the teacher when she was alone, and told her about it. Obviously she worried. She cried, she was angry with me, she gave all of the kids at preschool tutorials about chemo. She talks about "the first surgery," knowing very well that there was a second one.

Lenny remembers everything. It's one of the things that makes her Lenny.

I have noticed since she has started first grade that she keeps things from us. She gets a bloody nose, is sent to the principal's office until it stops, and I find out about it from another kid's mom. Boys call her names or give her noogies and I find these things out eventually, but not right away. When she does tell me these things, she is honest about whether or not they bother her. But the rest is just a cloud of omitted information, the kind that she used to provide without being asked, in full detail. This is a part of growing up, and it doesn't bother me, considering how I swear to God I never told anybody anything that had much import--not my mom, not my closest friends--when I was small.

I remember that feeling, that desire to shield the world from the things that I knew were problems, in order to spare them the notion that my life was not so innocent after all. I knew that I was a child, and that children weren't supposed to think about such things or have anything bad happen to them that they would then think about, and I wanted to protect adults around me from the knowledge that that wasn't true. And now I have this child who has always hated conflict--ALWAYS--even when she was just a tiny kid. She gets scared at the most basic animated movies, not during the scary parts, but when people or animals do something that would get them in trouble. She's been this way since she was less than a year old--the thought of negative consequences must just hang over her like a cloud. It's funny, because no one ever got in trouble in our house until Augie was about two years old. I don't know where that came from, that extreme conflict-avoidance--but I do know that she uses it still. 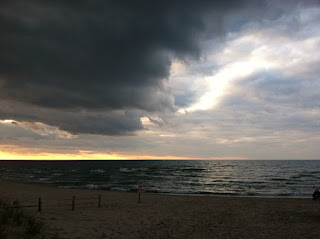 I ask her these questions in a seemingly offhand way and she knows it's not offhand, that this is some serious shit. So she shrugs, feigns amnesia, tells me it's nothing.

That's ok. Lenny is fine, she has handled everything very well, and she will continue to tell people things about it when she needs to, as she did last week. She's little. She's my kid. I have no idea what else to tell her about it outside of what I told her in front of 300 other people that one day in May.(If you want to see the video--here it is!) This whole thing has made me realize that I really need to revisit my Cancer Mentors idea. If a four year old, or a six year old, can hide things so well, Lord knows what teenagers are thinking.

When it's a kid in your own family, you can only hope that she talks to you when she needs to, that you have made it clear that it's ok, and that some other adult with a little bit of distance has the wherewithal to bring it up. And then you can let it go, and not say what you wanted to say when she told you about that cancer video, because you know the sentiment would make her squirm: 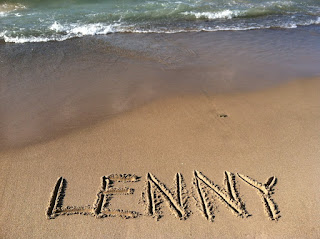 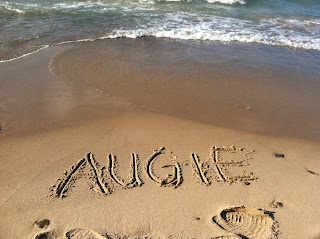