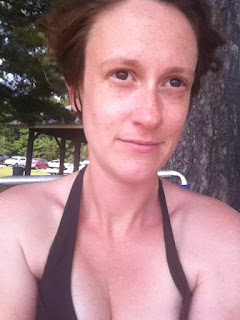 I was reading some story somewhere that used this phrase recently. Whoever coined that term was a genius. What an apt description! To explain how it is possible to be dealing with something painful or traumatic, disfiguring or paralyzing, and that no one who sees you would ever know.

I don't intend to make some comparisons between myself, and my issues with cancer, or epilepsy, or anything else, and battle wounds, if only because I hate the idea of my body being a warzone. After all, I am not the enemy. Further, comparisons of any kind usually fall short, don't they? Take, for example, the concept of making difficult choices. As I deal with this heart issue, I have been silently berating myself for "choosing" adriamicin/cytoxan/taxol chemo rather than taxotere and cytoxan. What if I made the wrong choice? What have I done to myself?

Luckily, this whole trip hasn't changed me that much, so I get it together pretty quickly in those situations and remind myself of what a choice really is. What job to take? Which man to date? Should I grow my hair out or not? Those are choices. Life looks different depending on what you choose, but there's no comparison between those things and the choice of what lethal poison to inject into your body so that you hopefully won't die young of an aggressive form of cancer.

It's just not the same, right?

And my worries about the tests I will do tomorrow, and the ones I will not do, are not the same as other people's worries. Yes, I know it could be stress. Or dehydration. Or allergies. But, I also know that it could be lung mets, or a heart condition. I know those things because my body is walking wounded in a way that many people's are not. There is no such thing as hypochondria in the years subsequent to a cancer diagnosis. We've been on the side of hope that it would be nothing, and lost.

That's not really what I want to talk about today, though. I've been thinking about our desire, our collective and hungry desire, to frame "winning" as the ability to do amazing things with our bodies, to prove to ourselves that our minds and our wills are stronger than our bodies' conditions. Our need to believe that youth and health and vitality are what makes us whole, what makes us worthwhile.

I could TELL myself that my liver isn't dangerously enlarged from all the toxic anti-convulsant medications I took as a child. I could ignore the fact that I can't do high impact sports anymore, or jump rope for very long, because my hips were severely broken in multiple places and those breaks never healed. I could deny cancer, the chronic pain or burned pec or high risk for secondary cancer or the potential for heart trouble. I could, but why would I? My body is injured, it's imperfect, it's diseased in some places, parts of it are broken and will never be the same.

But it's my body, and it's amazing, and what I am right now with these imperfections, including the ones I don't want to find out about tomorrow or in a few months or whenever, is good enough. And good enough IS good enough. What is there left to prove?

Walking wounded. I hear this phrase, and images pop into my mind. Photographs, things that have stuck with me for decades, that have shaped me.

A Life magazine shot of a little boy on a skateboard somewhere in the suburbs. He had half of a body--only a torso, head and arms. It's entirely possible he had no penis, no rectum, that the bottom of his body was just a mess of tubes. But he's wearing a shirt tied over the stump of his body and you can't tell, and he's looking somewhat bored as the camera takes a picture of him, probably wondering if the kids with full bodies have photographers following them around while they're riding to the park.

A newspaper series in the Chicago Tribune a long long time ago, profiling a 12 year old girl who was in an awful fire. She had no hair, no lips, hardly any nose, no eyebrows, no eyelashes, her skin looked like rubber and her face looked like a mask. She was riding a school bus, sitting by herself with a pissed off look on her face. No one would sit with her. She got in fights a lot. I told my mother she seemed like a really angry person. She told me, maybe, but why shouldn't she be? And maybe it's not anger, but defiance. Think of how she must be treated. Think of how it must be to get on that bus, no wig, no prosthetics, and demand your education. Maybe if she wasn't angry, she wouldn't have made it.

And then, a filmstrip. Folks my age remember those. We used to have these days in grade school when the whole school would gather to watch a film in the auditorium. Sometimes they were topical--stranger danger, things like that. But I also remember how every year they had us watch Free to Be You And Me, that amazing 1970s take on gender and racial equality that kids today would probably find ridiculous (though my kids love it) because they don't realize how important it is. We also watched the Red Balloon. I think that was the name--a silent French film about a boy and his balloon. They never told us why we watched that one.

Another film, the one I'm thinking of now, was a snapshot of a family. A suburban family, husband, wife, two kids, maybe a dog--I don't remember. The camera followed the mom, who stayed home with the kids, as she drove them to school, went grocery shopping, made dinner. Sounds thrilling, right? Well, it was fascinating. Because she did all of those things--without any arms. She had been born without arms, just stumps at the shoulders.

She used some contraption that allowed her to steer the car with her chin. She picked up melons by balancing them between her chin and her shoulder and dropping them into the cart. She cut up vegetables by placing the knife between her toes and using her amazing flexibility to rest her foot on the counter--the pre-ADA, regular height counter--and slicing.

I'm sure the message was supposed to be about inspiration, and accepting difference, and feeling lucky. But what I really remember was this. The father was in the background, behaving like a typical 1970s father, I suppose. He read the paper and had a drink while his wife made dinner. He ignored his kids. He sat there silently, and I don't remember the film focusing on him at all. But I kept thinking about him, wondering how they met, how they altered things in intimate moments, how he must have sat there shrugging his shoulders while she wielded the butcher knife between her toes, this woman, this walking wounded, who could seemingly do anything, except of course, not some things, including the fact that she could never have arms.

Damn,I remember thinking. Someone should make a movie about HIM.
Posted by Katy Jacob at 1:31 PM