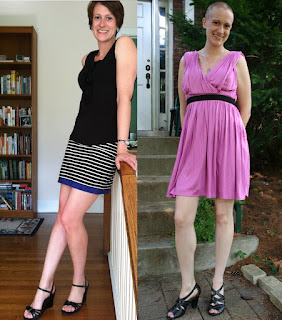 Wow, that title throws me. It's been more than 800 days since I was diagnosed with breast cancer. Looking at it from that vantage point, it seems like 800 days is nothing. The time has flown. It has crawled. I've wanted to stop time, slow it down, speed it up, just generally do impossible things in the space-time continuum, for a variety of reasons. Time, and the things we do with it, has been important, and it has been irrelevant. Days and milestones come and go.

I guess I should have written a blog at 800 days. Or, when it was the 2 year anniversary of starting chemo. But I didn't. I was occupied with other things. But I feel some urge to make up for those things, so here I am, writing a blog almost exactly two years after preemptively shaving my head before chemo took my hair away.

I don't have a lot to say about that experience that I haven't already said. I wrote a blog the day I shaved my head, , the day I made Gabe bic it smooth for me, and last year on July 15, 2011, when the memory was raw enough for me to acknowledge the anniversary. There's nothing more for me to add about actually being bald.

I can say that I learned some things. I learned that in some ways, having an extremely distinguishing, highly-appreciated characteristic, such as beautiful long red curly hair, can be a crutch, a burden, and a gift all at the same time. It can prepare you for rudeness, for people staring at you and then looking away. You learn an early lesson, which is that people are weird, focusing so much on some dead shit you didn't do a damn thing to bring into the world. Having something like that teaches you the importance of real compliments. My mom always taught me to give compliments based on things people could control: their style, their personality, their skills. Never give a compliment based on looks. People don't choose their DNA. I can't say I entirely agree with that; but I remember how uncomfotable it felt to have strangers (mostly white folks, I will admit) tell me I had a beautifully shaped head, and how satisfying it felt to have strangers (mostly black folks) tell me things like "that haircut looks good on you" and "I like your style" when I was walking down the street or standing in checkout lines while completely, utterly bald.

I mean, I didn't choose to be bald. It was horrible to shave off all of my pretty hair. But, in the end, I chose to walk around the streets of Chicago like that, like it was nothing. Once I was in the throes of chemo, I could have made a different choice, and it would have been fine if I had. But I will always remember getting those nods of appreciation for a decision I made. And the memory will feel something like pride.

I will always live in the house I built, the one where my three year old son sees a picture of us both bald, and when I ask, hey don't we look alike? he acts confused and says no, in that picture I'm a baby. You're a mommy. Yeah, but we're both bald, I remind him. What's bald? When you don't have any hair. Oh, ok.

Because, you know, it is. 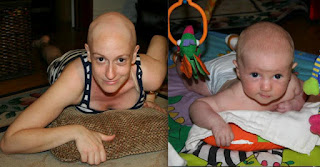 Don't ever tell a cancer patient it's just hair. Because it's not.

But it is. And one day, they will see it that way, and they will have earned that statement in a way that you haven't.

Hair, and breasts, and walking around without pain, and having normal toenails, and waking up in the morning and never feeling surprised--in this house, that's nothing. That's not the important stuff.

I live in this house now, where my hair actually looks stylish but every once in a while my husband runs his fingers through it and I see a wistful look on his face.

Because he's remembering how much he loved to touch my head when it was bare.

I live in this house, where it's hard to catch my breath sometimes, and my heart races when I get up too quickly, but I go to the gym in the 100 degree heat anyway.

I live in this house, which was probably an idiotic thing for us to buy more than a year ago, right around the time when I wrote my most googled blog of all time, and I love it every day with an irrational love that's all tied up in hills and bookshelves and floors that are beautiful when we never expected them to be anything but ruined.

I live in this house now, and it's a different place than where I lived two years ago. I don't miss my old house, but I do pass by it every once in a while. Sometimes, I even go inside.

They say that true courage is not being unafraid, but rather being afraid, and doing things anyway. At many different points in my life, people have told me that I was courageous by this definition.

I don't intend to argue with such a real compliment. But I've learned some things. One is that courage is beside the point. There's nothing else to do but do things anyway. Sometimes you are afraid, and sometimes you are not. Sometimes you have hair, or legs that walk, or a highly-functioning heart, or lungs that take in air easily, or cells that follow the rules. And sometimes you don't. 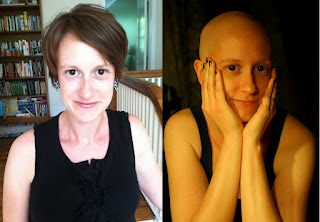 (Including, incidentally, Twitter. Follow me @KatyDidTweet. It scares me, but I'm doing it).
Posted by Katy Jacob at 7:01 PM