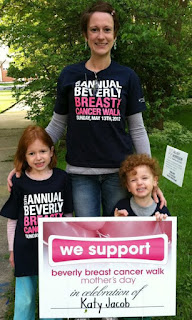 Yesterday, our family participated in our third annual Beverly Breast Cancer walk. Though we had lived in the neighborhood for years before we walked the first time--five days after I was diagnosed with breast cancer--we had never participated. I didn't know I had cancer when I signed up the first time. I do remember saying something to Gabe like "well, I guess it's good we're doing this. You know, just in case," after I felt the lump in late April. I didn't realize then what was coming, of course. My mom joined the four of us (Augie wasn't even a year old so he was in a stroller, but I honestly don't remember whether 4 year old Lenny walked or went in a wagon) and we did the three mile walk in our neighborhood, literally in a daze. The day before, I had nursed my infant son for the last time. I made Gabe take pictures so we would have that to remember, but I was so sad about what we were losing, and why we were losing it, that I hardly even remember doing it. So, during the walk on Mother's day in 2010, I basically stumbled all three miles, trying not to cry. The whole thing was awful. All of these people were laughing and waving pink flags and talking about saving the tatas and all I could think was that I was going to die. And that someday my kids would join that walk carrying a sign in my memory. I just wanted to disappear.

Last year, things were obviously a bit different. I looked very different, for one. I had hair, but not much. I was done with cancer treatment, not just on the cusp of starting it all. We had a team of 15 or so. Gabe was more emotional than I was--he was edgy for days beforehand and got choked up at several points during the walk, which didn't happen to me. I felt kind of...verklempt, I guess you could say, when I picked up my pink carnation from the survivor's tent. It started wilting before we even got home. People need to think these things through.

This year, things were different still. I was kind of looking forward to the walk, since the route went straight past our house and we planned to have a little party afterwards. We were supposed to have 23 people or so on our team, but there were some injuries and other issues and we ended up with 15 again, and a dog. The walk didn't seem so insufferably slow, and it was a beautiful cool but sunny early morning (south side Catholics, man, make us get up for this kind of stuff super early so everyone can make it to church), and it was kind of...fun. I wasn't really expecting that. 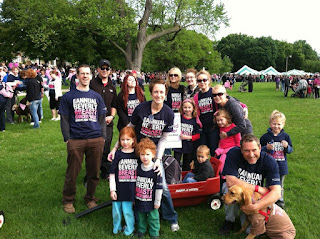 I bought a sign for our lawn and had my name inscribed on it. I didn't tie pink ribbons around any trees or write "survivor lives here" in pink sidewalk chalk. Shit, Gabe even forgot to mow the street-side of our front lawn. A friend who was on my team made these great signs that said "katydid cancer. now she's done" and people took turns carrying them around. I got some interesting looks when people realized the woman on the sign was me. I now have one of these signs in my lawn (still unmowed). I didn't get emotional at all, and amazingly, neither did Gabe. Afterwards, I did something I rarely do and actually put two of my friends to work in my kitchen cutting up fruit while I heated up the quiches I had made, fried some ham, made coffee, and got out the bean-corn-avocado salad and the chocolate chip banana bread, not even feeling embarrassed that all of that homemade goodness was sitting next to three store-bought coffee cakes and a cooler full of beer and Mike's hard lemonade...at 10 in the morning. 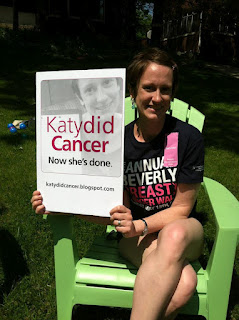 Then chaos ensued, and the kids played outside for literally five hours. I don't even know how they were still standing at the end of the day. The moms at the party didn't move from our mimosas or coffee or beer. Dads were put in charge, which meant that of all the things the kids could do, they settled on riding plasma cars down the steep hill of our cement driveway until they almost killed themselves on the pickup truck parked at the bottom, and the dads stood there nodding and talking about whatever dads talk about. No one got injured, though Augie and a few other kids did go flying off to the side into the bushes. I just kind of shrugged, thinking, huh, he'll live, but I also got livid when I realized Gabe was calmly CLEANING CHAIRS when Augie was off wrecking havoc somewhere and I was supposed to be off-duty. Then all the dads went to the park with the kids and we moms just sat there in the sunshine. During the 30 minutes the kids spent indoors, they destroyed the house, but I didn't even care. Gabe cleaned up most of it, I went for another, faster, walk, and then Lenny helped me plant impatiens. After that, I took a nap and woke up at 7 pm in time to read the newspaper while Gabe gave the kids showers, before we both put them to bed.

Sounds idyllic, right? No matter that Gabe and I got in a huge fight over nothing the night before, though I'm sure no one at our house could tell that. We were over it, I guess, though I'm still pissed that it happened, because the last few months have been so ridiculously emotional with everything that has happened that I think I should be spared all elements of marital strife. The mammogram, the show, the two year cancerversary--I was like a twig about to snap. Then, I spent my third mothers day since I found out I had cancer walking around my neighborhood to support something I would rather not think about again. Some people get breakfast in bed. I get a huge dose of reality, room-service style, served up to me every mother's day.

Now, don't get me wrong--this walk is meaningful for me because it supports the small local hospital where I did radiation every day for 7 weeks. I would have had a hell of a time if I'd had to commute to a large research hospital to get decent care. It takes longer to undress than to do radiation itself, so the shortest commute is almost a necessity. The radiation oncologist at this place is absolutely excellent, and he has a decent bedside manner to boot. They had that nice spa service while I was doing treatment there, and I got free massages and pedicures for months, which was a great bonus and a nice way to have some "positive touch" while my body was being burned and fatigued. And this hospital could use the money, where the big ones kind of have it coming out of their ears. And it's nice to see everyone in the neighborhood where you live supporting your struggle, even if it's just on the surface. The local Starbucks had a tribute to women with breast cancer and a few folks put my name on ribbons that were displayed in the shop, and I don't even know who did that. Things like that are actually meaningful, much more so than all the damn pink in our culture. The Starbucks thing is also funny, because all of my "names" were there: Katy Jacob, KatyDid Cancer, and even "Katy Sterritt." People will say "but your name isn't Katy Sterritt." Look, I know who they're talking about. Gabe isn't Mr. Jacob, after all, and he always answers to that without an issue. One of our babysitters said to him, you must be Mr. Jacob, and he said, well, I suppose you could call me that. And then we left. 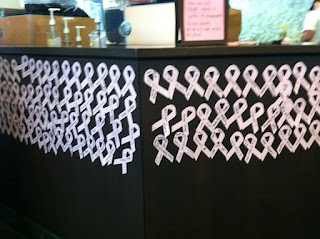 Choose your battles, if you have the opportunity to choose them.

Sometimes, you don't. And you fight a battle that isn't a battle and you fight something that isn't a fight but that's what people call it. It's a disease, and it kills people, 40,000 women in this country every year, and it forever changes the lives of those who are diagnosed with it and are lucky enough to survive. It makes you suffer and it makes you afraid. You walk three miles, something you do every day, and your breast hurts because it always hurts. Your arm pulls because it always does. You are just trying to walk and eat pastry and yell at your husband and put your hand over your eyes when your kid does something crazy and live like everyone else. It doesn't feel like courage, and you don't feel like a badass. The best case scenario is that you feel kind of...normal.

Just kind of, not entirely normal, because people are telling you they are happy for you, and it's your face up on that sign, and your 6 year old daughter knows all about the hospital the walk is benefiting and could tell you all exactly--EXACTLY--what radiation is. You look like everyone else on that walk, you are all wearing the same shirts and your hair is long enough to let you pass, and it's possible that no one would "know." But what is the point of that? So you walk to the survivor tent again, relieved that someone had the sense to opt for ribbons instead of flowers. You are shocked and saddened to see so many pink ribbons, and to realize how many women are walking around who are just like you. A man asks "so who is the survivor here?" and you raise your hand and he tries his best not to suck in his breath and he tries unsuccessfully to hide his surprise because, you know, you're young. And those adorable little children belong to you. And he knows that it's bullshit, because he must love someone who had breast cancer or he wouldn't be working the tent, and he asks you how long. "Two years," you say, somewhat surprised to hear those words come out of your mouth and realize they are the truth. He gives you a high five. And then he looks at you a little longer than he should, and he says...

Because that is just what people say. And something has shifted in you, because it doesn't even bother you. You smile and say thank you and walk home, representing for breast cancer, because that is what you do every day that you can still walk around.
Posted by Katy Jacob at 2:48 PM