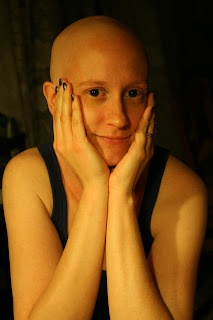 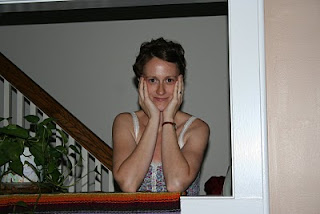 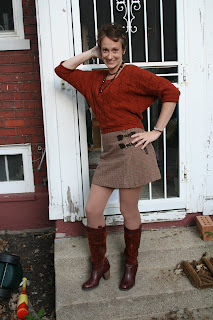 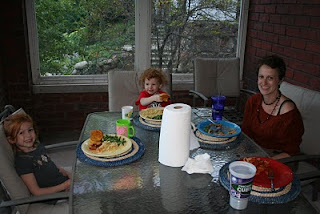 If this blog does anything for me, it shows that time changes things. A year ago today, I was released from the Critical Decisions Unit of the local trauma-center hospital after spending 36 hours there for chemo-related heart issues. That was one of the darkest times in my whole experience with cancer. I remember everything about that hospital stay as if it happened yesterday, from the conversation I had with Gabe about using my life insurance to pay for a nanny for the kids, to the kind doctor who attended to me and brought me some much-needed faith in the overall humanity of the medical community, to the realization of how immodest I had become in my new starring role in the Katy SciFi show, where I was bald, with fingernails painted black to try to stave off the chemo-rot, with heart monitors and patches all over my chest, reading a book about genocide in Rwanda and wondering if I was trading early stage cancer for a permanent heart condition.

And here I am now, with no more sense of the answer to my question than I had then. I have no idea how well my heart is working except to say it seems to be working just fine. And I have no idea if there is cancer in my body, though I can't imagine that there is because the concept seems too unreal, even to me, a person who has already faced the reality of multiple, insidious tumors growing inside me. I don't know, but I'm just assuming I'm all right. After these 500 days I've started to assume that I am actually a cancer survivor, that chemo didn't permanently alter the inner-workings of my heart, though I know it is too early to really say.

I've heard about breast cancer survivors who get multiple MUGAs all the time to assess the performance of their hearts, I've seen pictures of women going through AC chemo whose hearts were continuously monitored during the infusions. Not so for Katy. I never had any of that, just as I have never been offered follow-up blood tests. I guess this should disturb me, but in general, I just want to believe I'll make it. I left that hospital a year ago, ingested beta blockers every day for the remaining month that I did chemo, took myself off them, never followed up on my heart issue except to take Zyrtec when Taxol gave me heart palpitations, and have tried to not look back. My heart seems to work, but how do we ever really know what is going on inside of our bodies when we can't see it? The trouble is, you don't know until there's a problem. I felt wonderful until I found out I had cancer; hell, I physically felt just fine after I found out. You wake up in the morning and walk around and go about your day and just take it on faith that you can do these things, because, well, you are doing them. My heart must be working, because it hasn't stopped beating. I'd love to say the same about cancer--it must not be in my body, because I feel so opposite of what we assume it feels like to have cancer that it can't be true.

Cancer, heart conditions, epilepsy, many physical disabilities are ironically these insidious beasts that you often can't see. I have received so many comments in my life that start with the following statement that sometimes I feel that my goal in life should be to prove that appearances are deceiving: "But you don't look like someone who...":
has cancer; should be in a wheelchair; is so smart (a few guys have actually said that to me); recently had a baby; has seizures; does economic research; is in her thirties.

So who do I look like if not myself? How can anyone look like anyone else, and what are you really supposed to do with any of those statements, those supposed compliments that, perhaps unwittingly, deny some aspect of who you are? A year ago, Gabe said something to me like, you don't look like a sick person at all, you don't look like you have cancer or a heart condition. You just look like you, bald. Because you are just you, bald, doing cancer treatment. You're not sick. It's weird.

And he was right, it is weird, isn't it? It's weird how we can't get away from ourselves even when we feel like our selves have gotten away from us, that our bodies have betrayed us. Perhaps that's some kind of goal in and of itself, to be yourself completely, even in a state when you feel like someone else entirely. Because you don't have the option to be someone else, it's ok if you feel like you're faking it.

Today I was managing a conference at work, and I looked around the room, which was 90% men, and I was one of the youngest if not the youngest people there. And though I should have been thinking of other things, I found myself wondering, how did I get here? Am I really some kind of expert on payment systems? Is my work life a real thing, is this really me? People seem to like me and respect me in this environment, they seem to believe I know something, and perhaps I do, but then why do I feel like I'm just making it all up as I go?

In my role as moderator, I didn't know exactly what to say, so I spoke about the Fed's interest in payment system efficiency and integrity and payments governance. Then I said that I didn't think we should feel too bad that we didn't have all the answers. I related a story of how when I was walking into the Fed this morning, a very aggressive protester got up in my face asking me "Did you vote for the war? Huh? Did you?!" And I said to the audience at the conference, if there are folks who believe that the Federal Reserve, or me in particular, makes military policy, we shouldn't feel bad about being confused about who is in charge of something like payments. This got a lot of laughs, and some people even clapped. My strange confrontation in the rain made that little moment possible, and I couldn't have planned that.

A little later, one of the very few women in the room (hello? if we've made strides in equalizing fields where men and women work, I'd like to see the evidence) was talking to me about the event and then suddenly said, your hair is so cute. It's so daring. Huh? I asked, looking enviously at her very stylish short haircut. Mine is so average, she said. You're much more chic. I said thank you, but I thought, this is chic? This is sticking a barrette in my hair and tousling it after the shower because I have no clue what else to do and figuring, what the hell, it's a step up from bald so let's just walk out the door. And then I thought, this is how I know I know something about this--because I can just wing it, and it turns out ok anyway. I can use the story of what just happened right before I entered the building and it can sound relevant. I can be lazy about my hair, and somebody out there will think I spent money to get it to look like this. If I play it off well enough, enough folks will think I planned the whole thing, whatever it is, that my life will look purposeful and knowledgeable, which, in turn, might actually be true.

That's what I'm trying to do over here in general, I guess: be comfortable enough in my own skin that I can just wing it. Hell, maybe that's the only thing I've ever been able to do. I can sit down at the computer with no idea what I want to say, except that I want to comment on where I am today compared to where I was a year ago, and in the end it sounds like I had some kind of message, though I'm not sure exactly what it is.

It goes back to the old theme, the need to be able to see yourself as if you are outside of yourself. At the start of my diagnosis, when I was deep in the sorrow of losing my hair and potentially my breasts, a few people who were close to me told me that the characteristic that most defined me was not my hair, but my big black eyes. I didn't believe that then, and I don't necessarily believe it now, but perhaps I should take their word for it. Maybe the eyes show something: that weariness and acceptance from a year ago, the relative contentment of today. Back in those early cancer days, someone said that the "killer" thing about my eyes was not the way they looked but the way that they looked when they're looking at things, and that wasn't going to change. What a wonderful thing to say; what could I say in return? Well, I can offer that if eyes can show anything, it's just a reflection of what they see, of the world. So it's not me, but the world that I see and the life I've been able to live that is interesting, that is worth reflecting on. I like to think that I see the world as it is, that I'm comfortable enough with myself and this strange vessel and this convoluted mind that I can show my hand, reveal myself, without worrying about losing too much. So I guess I'm just writing this blog today to say that as long as it's still beating, I'll keep wearing my heart on my sleeve, or at least on my face. It's easier to see it there than inside of this strangely distorted chest.
Posted by Katy Jacob at 9:03 PM