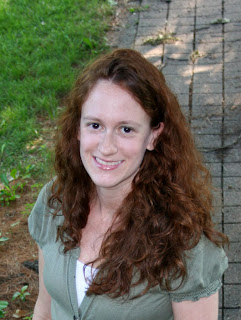 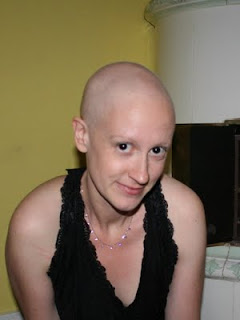 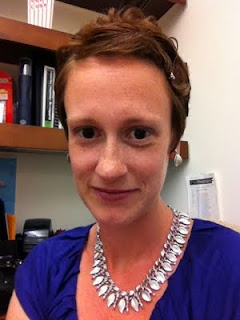 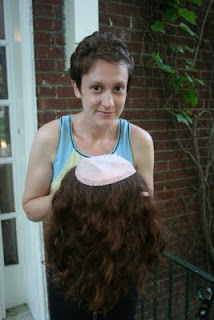 When I was first diagnosed with breast cancer, the doctor who gave me the ultrasound order said that he knew that the only thing I wanted was to be able to fast forward one year, to see what life would be like "after cancer." He told me that in ten years, I would be the woman who received a phone call from a friend, saying she had breast cancer, and looking for advice. Well, I really hope the prediction about the friend isn't true, though I would like to be around in ten years to receive happier types of phone calls. The first sentiment is spot on, though, because I was desperate to know what it would be like when a year passed. But some anniversaries are wistful, some are fun, and some are just a little macabre.

A year ago today, I had my head shaved and my long, pretty, curly hair shipped to a place in Florida so that I could keep it--wear it, even.

That hair pretty much sat in a box once it arrived. So did my $800 worth of wigs. It seems like such a waste now, but the inability to fast forward our lives brings us those moments of terrified spending. I just couldn't imagine what it would be like to be bald, to live as a bald woman. I scoured the internet looking for pictures of bald women, searching for testimony to tell me how long it would take for my hair to grow back, and I found little that was of use. So here's my contribution to those women who are doing the same frenetic searches today. Here's what it looks like before, during, and after. Here's one example of post-chemo hair a year and three haircuts later. And I guess the message is, it could be better, and it could be worse. The message is that somewhere down the line, the hair became the least of the issues, it took a back seat to all of the other cancer-forced changes, though being told that doesn't help when you're at the beginning of it, waking up from dreams of your bald self in the middle of the night.

A year ago, I was eight days past the start of AC chemo. For the first five nights, I didn't sleep at all--no sleep, not even five minutes, for almost a week. I was this short of clinically insane, and there I was working, taking walks, trying to have conversations. I started out 117 pounds and got down to 110--my chemo nadir--and back to 113 by the time I shaved my head. I had to leave the house, or at least go upstairs, whenever my family ate dinner or else I would vomit. I lost the ability to sweat, the ability to cry. I walked out of chemo with 9 drugs in my body, including one that causes permanent heart damage in 3% of the people who take it, and my body tried its damndest to say, oh no you didn't. You aren't doing that shit to me again.

But I did. Three more times, and four more with a different poison. Then I burned myself for a while. I went through menopause, went through so many things.

And now it's now. I have a new job, a new house, a relatively presentable haircut, and I weigh 116 pounds. I get up at 5:15 every morning on purpose to go spinning or to take a long walk. If I had even thought about spinning a year ago, I would have collapsed from the mental imagery of trying to keep a chemo-ravaged body steady on a bike for 45 minutes. But it's not July 15, 2010 anymore. The calendar really did turn, though for a while there I didn't believe it would.

Shaving my head was so hard, so sad. I cried so completely, something I rarely do. But I came back to myself relatively fast; I just sobbed and sobbed and then...I stopped. And I only cried for my hair one more time, when Gabe had to bic it smooth once it started hurting, pulling on my scalp all the time, two weeks later. At that time I wasn't crying for the hair itself but for the absurdity of the situation, the backwardness of what we were doing. Isn't it the wife who is supposed to try to give the husband a haircut with the clippers, to save some money by avoiding the barber? After that bit of morbid bonding, Gabe told me I looked sexy. He thinks this bald picture of me taken on our anniversary weekend is sexy, in fact, though by that time my eyebrows and eyelashes had started to disappear. There are things you are supposed to say when you're married, I suppose, to keep the peace, and though most men don't have the bald-sexy line in the repertoire, Gabe used it a lot. Maybe I believed it, maybe I didn't, but hearing it was better than feeling unattractive and alien for half a year, so I can thank him for that.

I've been thinking about what I would have told myself if I could see into the future and see my hair and feel my body and live my life the way everything is now. I would probably be at a loss for words, though. I suppose the right thing to say would be, you will be just like your old self, though that is not a truthful thing to say. The truth is, you will feel like yourself the whole time, even in the middle of chemo, you will not ever feel like a different person than yourself. That is the frightening part of suffering, that it happens to us, and we are still us, and when it ends we don't need to roll back into ourselves because we never left. Suffering terrifies us because it doesn't always happen to other people, it happens to us, and we don't get to pretend to be someone else in the meantime.

At the same time, I look at these pictures and it's like looking at several different people. In the first one, I had already had two cancer surgeries, so it's not a pre-cancer shot, but I just look completely different to myself with all that hair. The second one, where I'm stripped to the bone, framed as some kind of basic version of myself that most women never see, with no hair, makeup, what have you, and that's another person. Then there's the tan, huge-eyed version of myself, with that postmodern iphone glance that is somewhere underneath the camera, somewhere south of the middle distance. Finally there's me, fresh from spinning, thinking about how it took a year for my sweat glands to reemerge, knowing that my muscles could not only hold my weight but accomplish something athletic to boot, holding my once-vibrant hair, which Lenny informed me is "dead stuff like fingernails."

Maybe that's it, maybe that's what I would have told myself as I gripped the sides of the salon chair and got ready to have my head shaved: in a year you will go into the basement and find a hat box, you will open it up and take out your hair, and your husband will take a picture. The picture will be of you looking into the camera, smiling above the dead matter that had been lying in a box for a year. And you will think, better it than me.
Posted by Katy Jacob at 7:50 AM