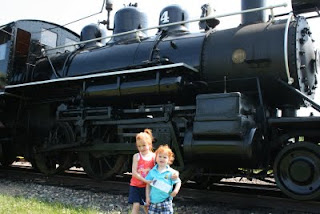 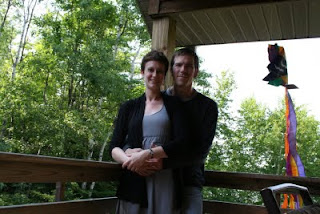 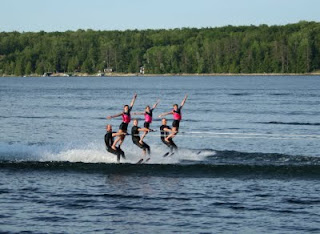 Anytime anyone wants to explain how easy something is, how quickly things come back, how hard it is to forget things that happened in your past, they say that it is like learning to ride a bike. And I know exactly what they mean to say, but I don't really know in another sense, because I never learned how to ride a bike. My brother and I never had bikes as kids--except for a few weeks when I remember my brother trying to learn to ride someone's bike in the house (don't ask me why--maybe he remembers) and another day when a friend tried to teach me to ride when we were about 12. When I was 21 or so, my boyfriend, a master biker, tried in vain to teach me. And that's when I learned that there's a reason that people learn to do these things as children. You know more about falling as an adult, you have less trust, you carry more weight, and you have much farther to fall. They don't make training wheels for adult bikes, and you can't find a grownup bike with a gear cover. It was really hard, and I failed.

And yet, at some point last year, when I was missing out on everything that is summer (and not for any decent reason, like I had a newborn baby, but rather because I was recovering from two cancer surgeries or poisoning myself with a drug affectionately known as the Red Death while I struggled to walk my bald self down the street for my daily constitutional) I vowed that if my cancer went away and I didn't have a quick recurrence, I would finally learn to ride a bike in the summer of 2011.

The last time we came up north, for Augie's birthday in late May, we bought a men's mountain bike for $50 at a local rummage sale. The bike wasn't actually for sale--it was hanging from the rafters of the old barn where the sale was held. We bought a few other small things and I had Gabe ask about the bike. Maybe it's the economy, who knows, but they sold it to us as soon as we asked about it. The guy filled the tires and Gabe took it for a test run. There aren't any places out here to buy bikes, and he always wanted one that he could ride while we were here. And a day or so later I had my first bike lesson from my husband. It was kind of an abysmal failure. We weren't here for very long, and we could only practice while Augie was napping. This time, we have the same drawback with needing Augie out of the way to have successful practices, but we have more time to spend so it's not a one-off lesson. Lenny borrowed a bike from a friend back home so she could learn to ride without training wheels (her bike is big enough for a 10 year old--a great bike but too big for her to maneuver without extra wheels right now). When Augie went to sleep on Monday afternoon, Gabe got ready to teach the girls to ride. We took turns having him push us down the gravel road, which slopes and ruts and is generally not the easiest surface to try to learn to ride.

Oh, how frustrated I was. I couldn't get started at all. If Gabe got me started, I couldn't get going. I felt like I had so little balance it was a wonder I could walk upright. Lenny was having trouble as well, but it was easier for Gabe to right her when she was wobbly. I thought to myself, she is like a foot off the ground on that bike, and she weighs 32 pounds (we're actually really proud of her for weighing 32 pounds--you go girl, keep hulking up!). I, on the other hand, felt too high up, too heavy at 116 pounds, too clueless. It seemed kind of hopeless.

So what to do? Embrace the failure and try again, I guess. For all those who say you need a positive attitude to accomplish something, I offer this. Maybe you could have a positive attitude, or you could just have enough stubbornness to do something even when you think it's inevitable you will fail. I kind of walked through cancer treatment like that, thinking this sucks, it's insane to do this, these side effects are a total nightmare, this chemo has brought me to my knees, this menopause will never end, and oh well, let's keep on plugging, here I go again. Anyway, the next day, after a great trip to the beach (we have been doing everything on this trip we missed last year--hours on the beach every day, paddleboat rides with both kids, trips on the old fashioned steam train to the lumberjack camp/petting zoo, watching our first synchronized waterski show while eating some really good fish), we tried again. We remembered to bring out the iphone and after a half hour or so of practice, most of it spent trying to just get started, I took a video of Lenny as Gabe pushed her and then let go--and she got it. She was riding this little bike and I was yelling, go Lenny! great job! not even thinking about how all you would hear on the video is my voice and the roaring wind. I was so proud, but more than that, so happy for her. Happy that she would be able to ride with the other kids, do the things I couldn't do as a kid. Happy that like most kids she wouldn't remember much about learning to ride a bike (though knowing Lenny, she will remember the whole thing). What a great moment.

And then it was my turn again. I sighed, got ready to have my failure recorded on film. Lenny took the phone to shoot the video. Gabe helped me get started for the seemingly hundredth time, and I pedaled with him holding on for a little while. And then he let go.

And there I was, 35 years old, riding a bike while my 5 year old daughter took a video. I posted this video on Facebook. At the end, Lenny shouted "hey you guys come back. I can hardly see you through the video." My favorite part of that is that she thought that by saying it out loud, we could hear her. My second favorite part was that my daughter will always be on the record as the one who bore witness to the weird scene of her grown mother learning to ride a bike. (She also took this picture of me and Gabe--perhaps she's found a calling).

We've kept up the routine over the last few days, putting Augie down for a nap, going outside to the gravel road to practice. Yesterday we both got even farther by ourselves and I got out to the real, paved road, for the first time. Damn, how much easier that was! If only I had a clue how to get started myself, or turn! But now I know what the "it's like learning to ride a bike" statement is all about. Today, I learned to get started by myself. Tomorrow, maybe I'll learn how to turn. All of this has happened with 45 minute lessons every day with each of us riding half the time and Gabe getting a hell of a workout running alongside us the whole time. He has a lot of patience, and maybe too much faith in us. Yesterday he let me go for a while totally on my own, and I was fine. Then, on the way back, I just lost it, and took quite a fall. Ugh, to be 35 falling off a bike. I was scraped up, the gear gouged me, I was sore and stiff all night just like an old lady. Lenny fell, bled, cried, got over it two minutes later like nothing happened. Today I took another huge fall, into a ditch on the side of the road. Oh the pain, as well as some scratched up raised bump on my left arm that hurts still, all these hours later.

I think about these injuries, and I realize I'm not really supposed to do this. If I listened to the doctors, I would be wearing gloves to wash dishes or plant flowers so I wouldn't scratch my arm where my lymph nodes were removed. Many women with invasive breast cancer wear compression sleeves to do any exercise at all. We are all supposed to protect that side with some kind of fanatical desire to ward off an affliction that no one really understands--lymphedema. And here I am, with tick and mosquito bites all over that arm (one tick got me twice as I sat in the house, playing solitaire), scrapes, bumps, memories of the potentially poisonous plants that I've fallen into--all on that side. Oh well, what can I do?

I said I would learn to ride a bike, and to some extent, I have learned how to ride a bike. It's not necessarily pretty, and I don't know how to turn yet, but I've done it, and on difficult terrain to boot. I don't think I will forget how to do it. I know I will never forget how I did it, with my husband and my daughter right there, in the beautiful north woods of Wisconsin, while my thick unruly hair was blowing the little that it could in the strong breeze and my son was sleeping peacefully inside.

Some people join support groups, some women find fellowship among all the other women who share this common experience, others have affairs or get depressed or become vegan or all of the above. I waited for the weather to change, for the sun to come out again, and I learned to ride a bike, just like I said I would. I have no idea how many other things that I've never done I will get to do, how long I will live, how long I will be healthy. I told myself that no more summers would go by without me knowing what it felt like to ride down the street in the open air, and when I made that promise to myself I didn't know if I would be here for another summer. But i'm still here, and I did it, and it hasn't been so hard after all. Like learning to ride a bike.
Posted by Katy Jacob at 8:47 PM