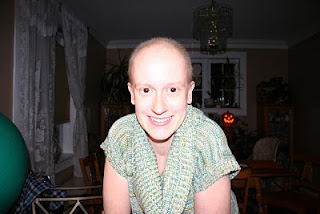 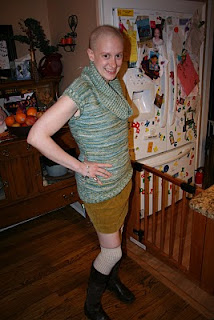 It seems like such a long time, and such a short time too. 200 days is way too long to have focused so much on cancer, and yet in terms of other things, such as the way the kids are growing up, it really does still fly by no matter what else you're doing. I should be officially done with the active part of my cancer treatment at Day 218. I will be doing the follow-ups for years, and I will still very much be a cancer patient, as I am now. Yesterday I was panicking because the pain in my spine is back. No matter that it went away for a month, that it's not there right now, that my son weighs 26 pounds and I pick him up a lot more or that I've been doing a new exercise routine. I'm in the new club now. Back pain? Bone cancer! That part is really hard. I'm just trying to ignore it now, assuming that I'm overreacting.

But I'm not really. Cancer crops up years later, where you least expect it, right when you think it's all behind you. I'm not going to focus on that now, because I am much more pissed off about the effects of chemo than of cancer itself today. Let me just shout out that I HATE menopause. I hate everything about it and how unfair it is that I have it at age 35. My hot flashes are a little better but still ridiculous. I'm figuring out how to deal with the changes in my sex life and libido, and even though I know I have a healthier sex life than many healthy people, no matter what anyone says I really HATE that part too. And boy do I hate my hair and my lack of eyebrows. I tried to figure out how to draw on eyebrows yesterday, because while my hair is coming in, my eyebrows seem to be thinning more if anything. I don't know if you can see it in this picture--do the eyebrows look bizarre? I've been bald for more than five months and I'm just now trying out the eyebrow makeup and I have no idea what I'm doing. I feel like I looked a hundred times better when I was bald as a cueball, with eyebrows. My hair is much longer than when I buzzed it off, but it's so fine and soft that it just sticks straight up and is not even thinking about lying flat on my head. Ugh.

I think my chemo-hating mood is exacerbated by the fact that I'm just starting to feel some radiation fatigue. I was told it would hit me right at day 20, and I had my 21st treatment today--2/3 done! This morning I'm just feeling exhausted, even though I did get some sleep. Don't get me wrong, I'm still planning on walking about three miles to my pilates session, but it might take me a minute. It also might storm, which would ruin my plan. It's been in the 60s here, warm enough to wear a skirt and short sleeves, as you see in the picture here. The temperature is supposed to drop 30 degrees today though. Ah, Chicago.

Anyway, my skin is doing remarkably well according to all the doctors and nurses, but it was irritated enough under my breast that I stopped wearing a bra a few days ago. I don't really need one anymore anyway, since I've lost weight even there, so I'll give my chest a break I guess. Aquaphor is still working for me, so I've just invested in a lot of camisoles and tank tops that will get thrown away when this is all said and done. No one tells you about these types of issues when you start treatment. Hopefully no one who reads this will ever need this information, but if you do, remember this: The cream will ruin your clothes, for good. Don't find out the hard way, as I did.

I keep hoping that with all the press around breast cancer, that things will get better or that there will be less mystery around the process of cancer. And yet I don't see any evidence of that. My acupuncturist, who had breast cancer 10 years ago, was talking about how she chastised her doctor when she had her lumpectomy because the whole process--the wire, the marking, the procedures you have before the surgery that they don't tell you about, how they leave you sitting in a wheelchair by yourself in the basement crying before they get you for surgery--was so terrible. I sent her a link to my lumpectomy blog as our experiences sounded so similar. I was glad to not be the only person to be pissed off about the whole thing, but also really sad. In ten years, nothing has changed, and no one seems to be listening.

Many people with other types of cancer might be pretty annoyed with what I'm saying. Breast cancer makes all the headlines, gets all the walks and the hope and all. Other cancers are often ignored or pushed to the side. But the hype doesn't seem to have changed much about the experience of having breast cancer itself, down to the stubborn refusal of the medical community to change its practices. Why will I be getting mammograms several times a year for the next several years when it has been proven that mammography is ineffective for young women, especially for women under 45? Why not ultrasound? When I think back to my initial denial--my one day of denial--on May 3 when I was in for the ultrasound that was supposed to show my clogged milk duct and instead showed two perfectly detectable round masses, and a third one in shadow--it was as clear as day. I didn't know it then, even though they were talking over my head about it, but my cancer was glaring in its obviousness: See this one here, at 2:30? And this one at 3? (They look at the breast like a clock, and your tumors get names for the time, but they don't tell you they're tumors right then. I wonder what they compare testicles to?) The mammogram that followed was almost pointless. I can still see that ultrasound picture as if it just happened five minutes ago, though at that time I had no idea what it would mean for me, for my life, for this 200 days.

I'm tired of writing now and need to get to pilates, so I'll end by saying that I hope that I will be able to look back on this 200 days someday. I don't mean to say that I hope I look back on it and laugh, or that I look back and realize that my life changed for the better or I felt the love or anything. I just want to be able to look back, to still be here to do that. That would be enough.
Posted by Katy Jacob at 9:16 AM