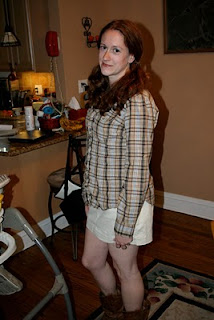 Wow, thanks everyone for all of the well wishes that I've received here, on facebook, via email, the phone, etc. I am extremely relieved about the BRCA result, and I understand why they say the waiting is the hardest part. At least now I have the first phase of a plan, and I don't have to wait extra time to schedule a more complicated surgery. The surgeon yesterday told me that my tumors (we're going with two these days) feel the same size to her and that it's probably the biopsy that is making them hurt and the weaning that has made them seem obvious. So, no bad news to report there.

Except the cancer part. That's still there.

I know breast cancer can be one of the most curable cancers, but it's the "invasive" in invasive ductal carcinoma that is keeping me up every night. I thought I would sleep better last night, but I'm averaging about 2-3 hours I'd say, mostly on the couch. My couch has always been good to me for sleep. I'm not afraid of surgery, but I am very nervous about waiting until at least June 10 to know if this thing has spread. And it's chemo that's really making my already busy mind go into overdrive. People say not to think about it or to worry about things you can't control, but that is quite honestly just completely impossible.

I had a dream the other night that I was cooking Thanksgiving dinner. My dreams are very real these days--no weird dream-like aspects at all. OK, my dreams have always been like that and sometimes I wonder if I am just such a literal person that my subconscious state is like other people's conscious state. But that's a question for another day. In my Thanksgiving dream, I was in my own kitchen, cooking the dishes I always cook for Thanksgiving, and my kids were my kids at their normal ages and it was even cold and gray outside. But then I woke up with a start. No, this has to be a dream, I thought. This isn't real. This Thanksgiving, I'll be bald. And I probably won't be able to cook. And then I couldn't get back to sleep.

I'm sure this bald issue is getting old, but I think I would be able to deal with it easier if other people could do it for me. A number of people have literally grieved when I told them I would lose my hair. How do I deal with that? I remember in high school that I had a desire to be invisible, because I had that long curly red hair and people would come up to me and ask me about it, touch it even. Men, old ladies, everyone. I ditched class once when we had a sub and was the only kid who got caught. The teacher said, "do you think I would forget you?" And yet, I never would have cut it. I liked it as much as anyone else. But I have never been so conscious of it as I am now. Every compliment I receive is like a stab in the back. And that's not because I don't know how to take a compliment, but because that is what people ALWAYS mention--I can't remember the last time that someone other than Gabe spontaneously complimented me about anything else. In college we had an orientation exercise wherein we had to say something nice about each person in this group of people we had just met. Every single person complimented my hair, except for one guy who told me I had good posture. I don't remember a single other person who was in that orientation exercise, but I still remember that guy's name and can picture him perfectly in my mind. All because he didn't mention my hair.

I don't think it's vanity--it's just this ingrained sense that my hair is what people see about me, and when I lose it they won't see me at all. Or worse, they'll see me as a cancer patient. I mean, yesterday the breast surgeon's nurse looked at me and said "I'm sorry but you have the most beautiful hair." Seriously? And what do you mean, you're sorry? You know I'm going to do chemo and that I'm going to lose it. That was the time for a different type of compliment, like "great shoes" or something else I can control. I was taught that you shouldn't give compliments based on people's personal appearance, because that's just DNA and they can't do anything about it. Style, that's a different story. Now with this whole tirade, don't think I'm fishing for compliments--I would just rather be invisible right now, and this is my blog so I'm complaining about it.

When I responded to the nurse "I know, and now I'm going to lose it," she gave me the obligatory "but it will grow back" and then she started on this long tale of how different women are, how it's harder for some women to lose their hair than their breasts, how 80 year olds who should avoid radiation get lumpectomies anyway and young women opt for double mastectomies when they aren't medically necessary. She said, we're all so different, and everyone needs different things. Now don't get me wrong. I actually really like this lady. She has answered all of my questions and called me back when I've called about strange things and she is very nice. But I was thinking, does it matter that we are different? These doctors seem to want to know what I want. A lumpectomy? Mastectomy? Um, I want to go back to May 2, when I didn't know I had something foreign in my body that could kill me. The rest of these choices aren't really doing it for me.

I hope that by the time Lenny is an adult, they have something resembling actual recommendations for women with breast cancer, based on age, stage, size of tumor, etc. Recommend something to me and I can decide what to do. Now, that is mostly what has happened for me, and I am grateful for the excellent care I have and will receive at Northwestern. I was told I was a good candidate for a lumpectomy and that I don't need a mastectomy. I was told that I have to do chemo and that if I do a lumpectomy I will need radiation. I was told that anti-cancer drugs won't work for me. Of course, I could refuse to do any of these things, but that doesn't seem like the best plan for a young mom with a bunch of blog followers. But with other medical issues I've had--with the exception of pregnancy--these "choices" weren't on the table. Diseased gallbladder? Remove it. Epilepsy? Take medication for it and avoid activities that might induce seizures. Pelvis broken in multiple places with massive internal injuries? Lie in bed until you can move again. None of these directives changed the fact that this thing was happening, but at least the removal of choice from the equation made me feel like something had happened to me and I needed to deal with it, rather than that my choices would dictate the result. My choice would have been working guts, normal electrical impulses in the brain, walking on my own.

I know that's the opposite of what makes most people feel better--control is supposed to help. For me, that has always meant control over my environment, not control over the actual medical decision. I will cut my hair before chemo does it for me. I will try to continue to work and exercise and have sex and take care of my kids and watch stupid action movies. But I have felt overwhelmed in part because of all of the things I need to decide. Pregnancy was like that for me the first time. Genetic testing? Amnio? Diet, exercise plan, breastfeeding decisions. If you go online when you're pregnant you are asking for a lot of disturbing advice and stories that you compare to your experience. The second time, though, I just ignored most of it. I really wanted to have a second kid, and I didn't want to waste what I knew even then was probably my last time being pregnant worrying about shit. With this cancer, it's hard for me not to ask other women about their experiences, but it's also hard to digest that information when I know that none of it might apply to me. Maybe in a few years I will be ready to intellectualize some of this breast cancer experience, but right now I just need to know what's going on with me, lest I get too wrapped up in the overwhelming aspect of things.

In all honesty I have also felt overwhelmed because in my weaker moments I feel like I have given enough with this body, that I've made enough sacrifices and learned enough lessons. I know many people have it worse, but when I allow myself to think about the next year, and the years of fear after that, it makes me so tired. I am feeling less tired now that I know a little more about what I'm facing and I've even started to think I might be around in 20 years to read back on this blog with some measure of embarrassment. On that note, if my hair ever gets long enough again, I promise Gabe to wear pigtails more often. It doesn't seem so embarrassing now.
Posted by Katy Jacob at 7:28 AM