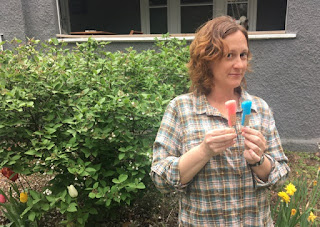 They have never read this blog nor expressed any interest in reading it. My daughter has articulated that she doesn't want to read about herself when she was younger. Behind that, I hear that she has no reason to need to read about ME when I was younger--when I was 34, or when I was 38 reminiscing about being 16, or anything else in between. She is too focused on being frustrated with me for the mother I am now, which is exactly what I said I wanted on day one of writing this--I wanted to live long enough for my kids to be pissed off at me for something other than dying.

And here we are. Lenny is about to start learning how to drive. She's the size I was when I graduated from high school. Augie's getting braces. His voice hasn't  changed, but everything else has.

So much has happened, but the main thing, the thing that was most often left unsaid, hasn't happened, not yet.

Years ago, when Augie was 4 and I was going through my second cancer, he let us know in a roundabout way that he thought I had cancer because I had him. He thought only women got cancer, because only women had babies. He might have been right about what caused my cancer--we will never know that, but pregnancy could have induced it. That's the reason I was told never to get pregnant again. On Mother's Day, I will always remember how I wanted to have a third child until a fertility specialist told me: "I guess you need to think about this: If things don't go well, do you want to leave your husband with two children or three to raise on his own?"

It wasn't a fair question. But it was the right one.

That second child had to be reassured that what happened to me was not his fault. And that even if it was, it was worth it. I told him that. I cried, in my fast, absent fashion, about the burden he had been carrying in his four year old bones. I have lived for 11 years past learning I had an aggressive form of cancer, and so have my kids. That knowledge is in the background of our family all the time, every day, like being redheads and yelling too much.

I worry about what it has done to them.

I try not to. I try to just focus on our lives, their growing up. I listen to my son talk to one of his baseball teammates about a game they used to play at camp, his camp, he explained, that isn't like other ones. It's a camp for kids who have a parent who had cancer. Oh, one of your parents had cancer?

"Yeah my mom had breast cancer, twice. Once I was like 5. The other time, I think that happened before I was even born."

And then they went off to warm up.

These burdens we carry. What is it we wish for them? That they don't carry them too. That something amazing might happen along the way.

That the burden would be so far in the background, they wouldn't even remember. And of course, no one remembers something that happened when they were 11 months old. But who could have guessed that it was possible that they wouldn't remember the stories either, that the guilt over being the "cause" would just be erased and transposed onto that other time, before they even existed.

Who  could have guessed? Someday, it would just be an offhand comment in the dugout in a conversation about playing mafia with college boys.

On my best days, I think maybe I did teach them that. There was this thing that happened. Damn, it's dusty out here. Grab your bat. Let's go. 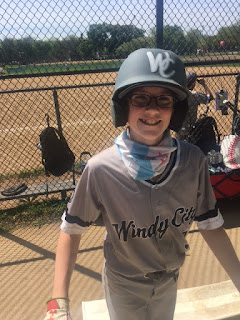