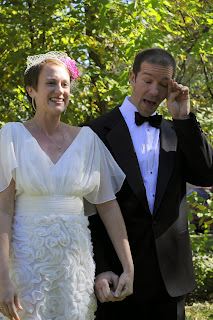 I've had an interesting writing conundrum recently. I'll think of something that I really want to talk about, related to cancer, or gender, or the intersection of the two, and then it will seem defensive or like I'm justifying myself, and I will decide that I don't need to say that thing at all, because I don't owe anyone any explanations.

So instead I decided to write about that.

That feeling of comfort within myself--that feeling of not having anything to prove, is one that I have had for much of my life, even in my youth, but it was never really something I felt comfortable with until recently--in the last five years or so. It seems ironic to say that I felt like I needed to justify not feeling like I needed to justify my feelings or actions, but it's true. If you are always kind of on the outside of how people think you are SUPPOSED to behave--whatever that means--this can be a big part of your life, especially if you are a woman. You might think, why don't I feel guilty? Why didn't I cry? Why is he more affectionate than me? Why do I like to spend so much time alone? Why would I rather talk to my kids than play with them? Why would I rather sit quietly in a room with my kids doing different things than talk to them? Why do I hate shopping with other people? Why am I loud? Why am I first in the line to eat? Why did I never think to turn off the lights? Why don't I feel fat, or skinny, or ugly, or wrong? Why is that woman mad at me? Wait, now I now why she's mad at me, but I still don't get it--I still don't think that should've made her mad? Why is my first instinct after getting robbed at gunpoint to call my ex-boyfriend and watch an Arnold Schwarzenegger movie?

And finally, why have I never actually asked myself any of these questions?

The Internet is filled with blogs and stories about women second-guessing themselves and feeling negative, inadequate, guilty, overwhelmed and then triumphing over those things. The Internet is also filled with stories of women who are proud to flaunt stereotypes, who swear too much or are terrible at crafts or who love to golf or whatever. Or maybe it's not, but it just feels that way. The thing is, what I find myself craving is more about women, and yes, I do mean WOMEN, even though I'd love to see it more from men too, but I want to see stories of women who just don't care because they're way past caring.

Stories of women who are happy to be grown-up. And no, I don't mean aging gracefully or proud of their curves and laughlines or still into fashion or pantsuits vs. mini-skirts. I mean actual adulthood where you have earned the right to not care what anyone thinks about what you're doing or not doing.

I've been an old lady since at least 17. It was almost impossible to embarrass me as a teenager--the time when life is ruled by embarrassment. Just ask my friends and boyfriends. My mother did not give one shit about what people thought of her and seemed to not understand the concept of feeling embarrassed and even THAT didn't embarrass me. But the truth is, I had to be taught that lack of embarrassment. I had to see it to believe in it and to emulate it. I want more of that.

I want to hear more stories about women who don't know what stories to tell anymore. I want to think that there are other women who write blogs about cancer and have a lot of things to say about how isolated women feel when they don't react to cancer the way they are supposed to, and the way people's reactions towards women with breast cancer are so similar to reactions towards women who have been sexually harassed or assaulted (and no I am not speaking on behalf of others--just from my own experience, where the comparison runs true), but then they don't write those blogs because you know what? Mama don't have time to explain that to you. Think what you want, believe what you want, I am just going to keep on trucking because I. do. not. care.

I want to read something that makes me believe I am not the only one who didn't feel any epiphanies from cancer, because I had those already at least 30 years ago, from people who are not better parents or lovers or friends because they have suffered, from people who are just doing their best.

I want to hear about the people who remember with fondness and some kind of absurd longing and expectation their mother telling them "I like to pay the taxes and the bills and balance the checkbook. I like being a grownup. I like being in charge."

I want life the way it really is when you've forgotten what it means to be cool or popular or smart or athletic or whatever it is you thought meant something at some point. I want the story about the people who aren't trying to tell other people how to be better or less toxic or more grateful or more or less than the thing that they are. The story of the adults who accept the other adults and love them for being in their lives because life is short and, well, here we are. The story of a mother who is upset that her shy daughter told another little girl at a Halloween party that no, she didn't want to play with her. That mother told the daughter that she should've played anyway, even if she didn't want to, because the other girl was bored and lonely too, and for that moment, she should have cared more about the other person's feelings than her own. That mother knew she was asking her loner of a daughter to understand something that was beyond her years to understand but she didn't care, because she was the adult, and it was her job to teach her daughter that it's not about you. It's not--it almost never is. And then, that mother told her friend about this exchange and they both laughed and shook their heads, and the friend said, well, what can you do? Look at her dad. And pointed to the woman's husband, who was wearing Superman footie pajamas and sitting amongst a bunch of adults just looking down at his hands and not talking at all because he had had enough. 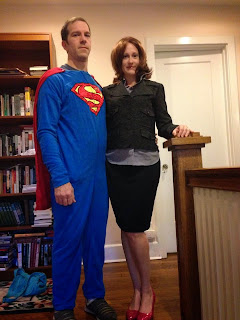 And no one cared. Because when you're grown, you can sit in the damn corner and do what the hell you want and pretty much no one is judging you and most likely someone is envying you.

I really don't know why I'm writing this. Maybe it was all precipitated by Renee Zellweger's face. All the drama and angst, the trying to figure out is it plastic surgery or just the fact that the comparison pictures were from 20 years ago? The women saying who cares, the women saying I care, the actress herself saying I'm happy. Me thinking, God is that what happens when we age? People keep asking us about our damn faces? About our happiness?

At some point, your face is just your face. It is the thing that helps you talk and see and interact with people. At some point, happiness is a means or an end or a goal but it is just one of many possibilities. The thing I hope to earn with age is not happiness or contentment or scars or wrinkles that serve as badges of honor or even wisdom. I want stories. More stories. I want ambivalence in the face of reaction. I want to be so old that my tiny stooped shoulders can shrug at the world and say, so? Think what you want. Let me tell you about the time...

I think of age as the privilege of seeing your life as a really interesting story that is sitting on the bottom of the pile of millions of interesting stories. I think of age as not having to worry about leaning in or leaning out but rather just...kicking back. Kicking back and flinging the ash off the cigarette that you're not supposed to be smoking and that you're probably holding wrong and just watching the people pass judgment on you one way or another and not noticing anything but the curl of the smoke.

I want more stories about how things are, not more explanations about how things got this way. Maybe I've failed at that for the last four and a half years, but I've tried, and I'm trying. I might be fully grown, but I have some aging to do.

I have a small story and I'd like to tell it here. It's a story about being a woman, a mother, a wife, a person who has had cancer. This story is maybe a paragraph long. It's a story of adulthood. 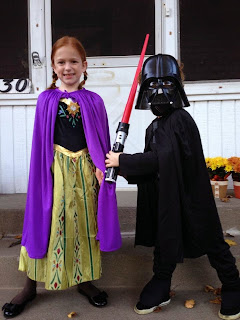 I was getting my hair cut at the salon the other day. I was going shorter than I have in a long, long time. I sat at the shampoo bowl and chatted with the woman shampooing my hair. She had baked banana bread and had offered me some, and we talked about banana bread recipes. I told her my daughter liked it when I put chocolate chips in it but my son liked it plain because he is like that. She asked me how old my kids were, and I told her 5 and 8. She paused and said "You will have such a beautiful life. It just gets better as they get older. It just gets better as you get to know them as adults. Enjoy it. It's a blessing." And for a split second I felt this aching pang, as I thought of how I might not ever get to know them as adults, that I might not ever experience that beauty and that blessing. For one second I thought, how could she know that she is making me confront one of my greatest fears and potential losses as I sit here waiting to get my hair done? And then, it happened. I didn't feel like that at all anymore, and I could tell somehow what she was really saying. She was saying, my husband is dead. My children are grown. I bake banana bread for the girls at the salon. I spend more time than is necessary washing your short hair. .

And so I thought to myself, this isn't about me at all. It hardly ever is.

I told her this: "That's what I've heard. I can't wait. Thank you." She told me I was done, and then asked if she had forgotten to offer me water or coffee and I told her she hadn't forgotten, and that I didn't need any, thanks.

There we were, lost in our own thoughts, but pretending we weren't, in order to live inside that brief moment of grace, in order to give the other person their moment of importance. 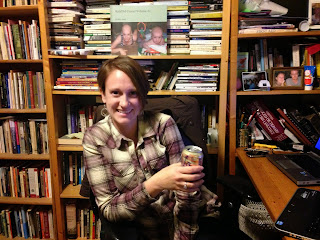