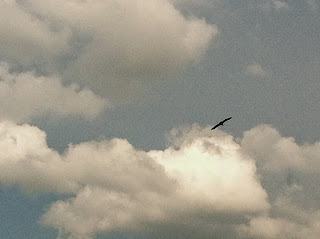 Almost a year ago today, I sat in the north woods of Wisconsin, and I wrote this:

So, here I am, this strangely healthy vital person, and my body is a walking testament to science, the good and the bad. My body is a continued experiment, as it always has been in some ways, since I was a little kid.

Sixteen days later, I would be diagnosed with breast cancer for a second time. I left Chicago for the woods knowing that I had a lump in my breast. It was confirmed by by gynecologist; I had gone to see him for my annual checkup and asked him to feel that lump for me. I know now that he probably knew I had cancer then. He made me promise that I would see my breast surgeon as soon as possible. I gave my word. And then he told me to go on vacation, and I did. It was to be the last vacation I would go on for some time. Our summer was upended by cancer yet again; I have two lost summers because of this disease.

It's strange to acknowledge that, every time we are anywhere experiencing anything, we don't know what might happen next. Or, maybe we do know, but we are still able to pretend that it isn't going to happen and enjoy where we are right now, today.

I feel like that pretty much all the time.

I know that I have been given this summer, in the same way that I was given the summer of 2012. It is a summer without surgery, cancer treatment, or recovery from cancer treatment. It is only the second of the last five summers like that that I've had. I don't have to tell my kids that I can't get in the water with them because I don't have the surgeon's permission yet. I don't have to ask my chemo nurse to alter the schedule so that I don't have to be infused on my birthday. I have the energy to play baseball in my front yard and take the kids swimming and to get ice cream while Gabe works late.

I have hair. I'm not in menopause, or puberty. I'm missing a part of my body that was there a year ago. I get tired because I'm busy and I'm getting older, thank God. I'm not the same--I've gained some weight I can't lose, I feel my age more, I've lost any feeling of victory that I might have felt related to cancer, though I don't think I ever felt that way, not really. I've stopped wearing makeup, what little of it I wore. I seem to have come out of my PTSD or depression or whatever it was I was feeling just a short time ago. I have become lazy in some ways--I contact people less, I don't go out of my way to be social. I really don't care that people think summer shandy isn't real beer. It's my summer, and the days are already getting shorter. 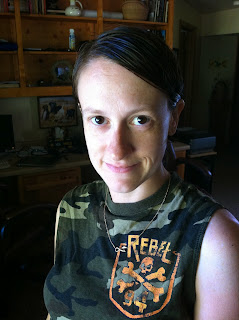 Just a few days after I wrote the words about my body and science, I wrote this:

I've fallen in love several times, met men in interesting places, including on a cross country train, married someone who seems to adore me. I have interesting, charismatic children. I have studied important things and built a non-traditional career for myself that has suited me just fine. I have stuck my stake in the ground of my favorite city and I have never regretted it. I have seen the sun set and rise in some truly beautiful places in the world. I have lost the working function of almost every part of my body at some point, and had the pleasure of watching it all come back to life. I remember learning how to walk. Shit, I finally learned to ride a bike...when I was 35. I have lived almost every day feeling this body and this life as if it was some kind of miracle, even when it seemed almost impossibly small.

I don't feel differently now than I did then, 10 days before my second cancer diagnosis. It is a good life. I know that. I'd like to have more of it. As I told a childhood friend who asked about people's 40th birthday plans:

So this summer, before I turn 39, I will be working hard, and traveling a lot, and I will be stressed and overextended. I will never be one of those parents who is able to give her children a carefree and leisurely summer. They will go to summer school. Our weeks will be hectic. And yet, we will be outside at every opportunity. I will let them stay up late, or eat cereal for dinner. We will be freckley and sweaty and tired and happy. We will enjoy this summer as if there is nothing else possible looming in the future, because as of right now, we can. 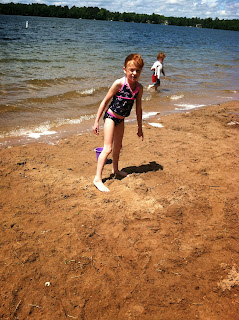 I stayed up last night listening to the loons call, right off of our dock, so close it was as if they were in the house with us. I asked Gabe if they were nocturnal. He said he didn't know; maybe they were, maybe they just acted like it sometimes. I thought that was a good answer. It was a beautiful night and the wind had been so strong that some of the bugs had blown away. Maybe they knew it was impossible to tell when they would get another night like that, and they didn't want to miss it.

These days, more than ever, summer is like that.
Posted by Katy Jacob at 11:39 AM