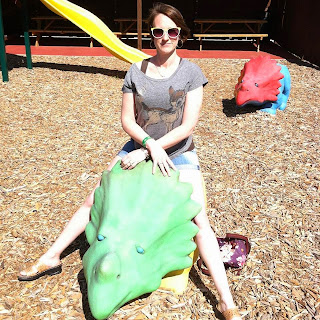 I've never liked how people with cancer are called "fighters." It's not fun, nor enviable, to fight yourself, to be at war with your own cell biology. The battle metaphors quickly wear thin, especially for breast cancer, as they seem somehow patriarchal, even somehow misogynistic; our bodies are just never RIGHT, are they? It's all just somewhat...violent to me, this slash, cut, burn, poison, kill. It's tiring to be a badass all the time. We didn't enlist; we were drafted. We were put in a sink or swim situation and then told to act as if we entered the race on purpose to prove to all the healthy people that our breaststroke is, indeed, superior.

So, I don't like this notion of being a fighter.

And what do I do now?

For as long as I can remember, I have been fighting something. I've fought my body for over 30 years. I don't mean I have had body image issues, or any other normal woman body things, though I have had those too. I have fought to stay alive, to continue to function "normally," to keep my place in the world. I have cheated death five times. My body, and my brain, has just stopped working on so many occasions. I have lost the normal function of almost every part of this corporeal self--my legs, brain, liver, lungs, chest muscles, you name it. There has always been something to "manage" or "overcome" about my body. And that type of fight can be so consuming; even while I have managed to continue to do the normal things of life, it is always there, this fight. The weather of my body is just so CHICAGO--I am aware of it all the time, and it can change on a dime. There is no taking health or physical ability for granted. There never has been.

The fight has bled into other areas of my life--maybe into all of them. I have always been stubborn, and willful. More than one man has tired of the relentlessness of my fighting style. I chose a career that kept me fighting, and in a big way: I fought some of the largest financial institutions in the world, before it became fashionable to do so, when I was not even 25 years old. Headhunters from some of these firms wanted me on their team, because I fought them so successfully, with my research, letters, Congressional testimony, activism, and on and on, that they thought it might be easier to work with me than against me.

I spent my teenage years fighting off men, and boys. I fought them literally with my fists and feet and figuratively with my suspicion and overdeveloped instinct for self preservation.

I fought to make this career for myself out of thin air, it seems, as I somehow became a business economist for the central bank after taking...one econ class in grad school.

I fought to build a semblance of a functional marriage and family out of the seeming ashes of the circumstances that my husband and I hailed from, and during the few times when it seemed destined for failure I was prepared to fight to do it all on my own.

And while I never felt like I was fighting with cancer, I suppose I was. I fought with my oncologist, I fought people's perceptions of me, I fought to keep my job and said to hell with it about my hair and then I fought to pick up the pieces and start again, even buying and renovating a new house in the process. And then--it came back, and I am back to where I was three years ago, being asked to start over, to start the clock again, being asked to admit that NED doesn't mean a damn thing in this house, there is no remission, there is only waiting, and resignation, and the realization that I might not have that much fight left in me. I have been taken out of the skirmish or the battle or whatever you want to call it, and I don't know how to live in the world where I am not fighting something, where my family life is stable and happy and my job calls for coalition-building and the day to day things loom large in my consciousness and it all seems so...pedestrian.

I am adrift. I am doing all the things I am supposed to do, and I am even doing some of them well. But my heart isn't in it. I can talk to people as easily as ever, but I am left feeling somewhat isolated even as the conversation flows. I think about life and death while other people think about cooking dinner and it leaves me wanting nothing more than to think about cooking dinner, or hell, it leaves me wanting nothing more than to just EAT dinner, as the physical takes on infinitely more importance than anything else. At the end of the day all I want to do is...NOTHING. It is hard to think about the long term future when you aren't at all sure you will have one, and when you live with that uncertainty, the short term future just seems kind of irrelevant. And so, the only thing that matters is that which is happening NOW, or a few minutes from now. The things that have happened in the past are relevant, in that they shed some light on the big issues that threaten to take over all your thoughts. Every single action can be compared to the symbolism experienced when you stood inside the footprint of an animal that has long been extinct and once walked a much different earth 115 million years ago. Everything seems relative, impermanent, absurd. The world is full of bombs waiting to go off and enemies at the gate. 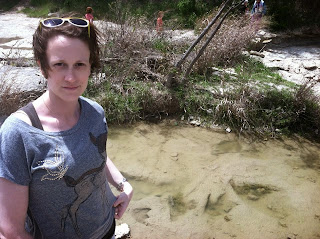 And so again I ask, who am I if I am not a fighter? And really, what am I supposed to do now?
Posted by Katy Jacob at 7:46 PM