Luckily, not everything in life is learned by example. If it was, we'd all be out of luck over here.

I haven't been the best wife recently. I failed to write a post for my husband's 38th birthday on Friday. Hell, I wasn't even HERE on Friday; I was on a business trip in Atlanta. Once I got home from the airport that night, we went out for a quick dinner and a game of mini-golf. Yes, I am married to the guy who wants to go mini-golfing with me and the kids on his birthday. Last night we went on a double date; a feat so rare I'm not exactly sure that it really happened. I didn't know what to get him for his birthday or for Father's day, because he's impossible to buy for, so I got him some clothes and baked him his favorite muffins AND a chocolate cake this morning and bought a few of the least-ridiculous cards. 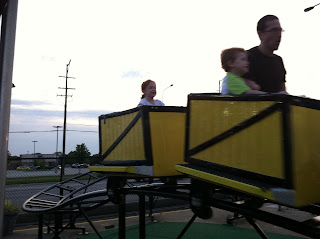 And now I'm writing this, the first Father's day post I've ever done in this forum. Maybe that makes up for the missing birthday one. I haven't had any motivation to write anything at all of late, and I wasn't sure what to say today. And then I saw all of the posts on social media about people thanking their fathers for being great influences, saying they don't know where they would be without their dads, and I thought this:

What does my husband know of fatherhood by example? Nothing. He's never met his father. He had some important father figures--his grandfather, other people's fathers, boyfriends of his mother. To me, the important thing about those people was not just that they stepped in the way they did, but that Gabe could see that that is what they were doing, and appreciate it and accept them as being family in the way that people who are not blessed with "normal" families create families.

I don't think I could be successfully married to someone from a "normal" family, not realistically. What would we have to say to each other?

We have some photographs on our piano of two young women, college-aged, whom I always refer to as Gabe's nieces. They are not his nieces at all. They are the children of a man whom Gabe's mother dated when he was 6 years old, who spent a lot of time with Gabe for the rest of his childhood and adolescence, and who until a few years ago drove out to Chicago every year to visit our family from California in his RV. He sends cards at Christmas and on birthdays. He's the one who mailed us the only existing pictures of Gabe playing soccer, of Gabe's 2nd grade class. Sometimes Gabe calls him for advice.

It is easy to overlook that which seems given. Your parents are supposed to love you and look out for you. It is easy to take that for granted. It is much harder to forget those who had no obligation to you but stepped up to the plate anyway. We were visiting with one of Gabe's childhood friends from California recently, and he said something to Gabe about how he did a good job of basically raising himself. And Gabe said no, I had a lot of help from people like you who just let me hang around all the time. And I thought, they're both right. I thought about the friend of Gabe's who got married several years back, and when I was getting a tour of their house, his mother said, and here's Gabe's room, because that's where he lived for a year and a half in high school. We have been together more than ten years, and I just asked him the other day how that happened. He said, well the first time, my mom asked, because we were losing the apartment. That was just for a few months. The second time, I asked if I could stay there, because I didn't have anywhere else to go.

I thought about a 16 year old boy swallowing his pride and asking for a place to live, and then I realized he didn't swallow his pride at all, because he felt no compunction about doing what needed to be done.

Like changing diapers when he had never done it. Or always being the one to feed his infant daughter her bottle, because she was a terrible nurser and his wife was always pumping new milk while he fed her the refrigerated milk. Like getting up every single time his son woke to nurse, just because he was used to doing it, and changing him and handing him to his wife and sitting on the floor until they were done though he could have gone back to bed. Like taking the entire paternity leave allotted to him and staying home with the baby for a month by himself even though none of his colleague's understood that. Like rejecting a promotion because it would have taken time away from his family. Like always being the one to take the kids places. Like having kids soon into the marriage even though he wasn't sure he wanted to, because his wife didn't want to be any older when she had kids. Like getting a vasectomy.

People always like to talk about things that we learn from others, and as parents I believe we over-inflate the importance of our influence on our children. Children need to be loved and to feel secure. Some children never receive those gifts, and many of those children become lost as adults. Other children find those things where they find it, and still others go asking for it, and in the process help to save themselves. Gabe and I are both the kind of people who have had some vital foundational love but who also went looking for what we needed when things got strange. Some of those children who figure out how to cobble it all together grow up and say yes, let's buy a big house right when one of us just finished cancer treatment, let's do it not just to move on to another stage in our lives but because someday we're going to take in at least one kid, right? One day we are going to parent someone else's kid--it's a GIVEN--and it would be nice to have a lot of space to do that.

People also like to say that things are meant to happen. But how could that be? How could it be that people are meant to suffer the way they do? One of the only presents I intend to give Gabe today is an essay I wrote about him based on one of the sadder aspects of his childhood, something we learned about when we visited the co-op in Wisconsin where his mom lived after he was born. I'm sorry, but things that happen to children--to BABIES--that threaten their lives are not meant to happen.

And people who meet and love and marry aren't meant to be either. Are Gabe and I meant to be? Who knows? Who cares? When we met I would say that I thought he wasn't my type--even though I don't HAVE a type. But I thought there was something there...some POTENTIAL. For what? For this? I have no idea. Sometimes, I can't stand him. We have almost gotten divorced a few times, including right after we got married when he had a terrible time adjusting to what he called the "pressures" of being married. He seemed terrified of failing at something he didn't understand. He seemed to feel the same way about having a boy; he loved being a father to a girl and wondered how he could ever parent a boy child, when he wasn't characteristically "guy-like" himself. After all, he is the sentimental one, the one who cries, the one who is nurturing. I told him that he would love our son because he was our kid, and that it would be the same as it was with our daughter. He didn't believe me, and I honestly think he wasn't that excited about Augie being born. And then he was born, and now he is four, and he is that boy with that dad who calls him sweetie and coddles him a little too much. 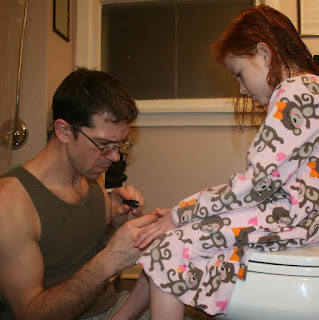 It would be difficult for a woman like me to be married to a different type of man, because then how would we balance each other out?

But of course it wasn't destined. We chose this. It would be possible to feel passion and lust and love and friendship for a thousand other people. It would be possible to be attracted to someone entirely different, or lots of someones. Of course it is possible. Some people live for that excitement, the excitement of the chase, of getting to know someone for the first time.

Those people are missing out on their own marriages.

We are always getting to know someone for the first time.

As a parent, one of the great pleasures lies in seeing other human beings learn to do things that seem conceptually impossible until they take that leap of faith and do them: walk, talk, dress and feed themselves, and basically everything else that there is to do and learn. This type of observation can help us observe the same types of things in adults.

Yes, there is the laughter and sex when you're dating. There is adventure and putting your best foot forward. Hopefully, those things exist in marriage as well. Every time you think you might get something more interesting somewhere else, think of it this way:

There are a lot of people who are attractive and interesting and intelligent and funny and sexy. But there is one, right there, who is those things and who also sings your kids to sleep in the middle of the night and shaves your head with a Bic and a can of Barbasol.

It wasn't meant to be, because no one could see it coming. But here we are, all the same.

Happy father's day, Gabe. Here's to learning as we go along. 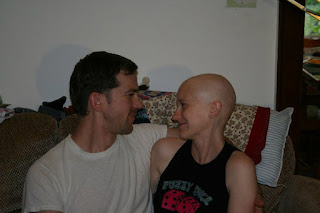