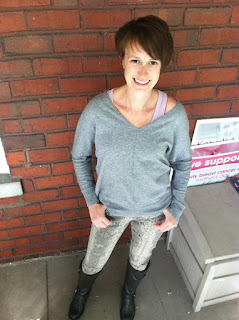 I've said it before--this breast cancer stuff is sure a strange trip. Things that are promising and exciting can still manage to leave you with that sense of dread, or fear, or anger, or all three. Things like the fact that there is significant progress being made in figuring breast cancer out, as in REALLY figuring it out, not just talking about awareness and hope and bravery.

Several people have sent me a link to a story published in the New York Times about this research:

Those of us "lucky" enough to be survivors of this disease talk about what is behind this research all the time, even though we are not "experts." We know that this is not one disease. We tell each other, my cancer is so different than yours. I think to myself, I had none of the risk factors (except for early menses, long-term birth control pill use and recent pregnancy/nursing; those latter two having only recently entered the general conversation about risk factors) associated with estrogen-positive cancer. We question why some of us live and some of us die.

And lo and behold, when I talked about the fact that "triple negative breast cancer doesn't exist," it looks like I might have been right. And with that potential truth lies the possibility for treatment for TNBC that will be effective, rather than just a shot in the dark. And yet... how should I feel about learning this? And by this I mean THIS:

The study’s biggest surprise involved a particularly deadly breast cancer whose tumor cells resemble basal cells of the skin and sweat glands, which are in the deepest layer of the skin. These breast cells form a scaffolding for milk duct cells. This type of cancer is often called triple negative and accounts for a small percentage of breast cancer.

But researchers found that this cancer was entirely different from the other types of breast cancer and much more resembles ovarian cancer and a type of lung cancer. “It’s incredible,” said Dr. James Ingle of the Mayo Clinic, one of the study’s 348 authors, of the ovarian cancer connection. “It raises the possibility that there may be a common cause.”

There are immediate therapeutic implications. The study gives a biologic reason to try some routine treatments for ovarian cancer instead of a common class of drugs used in breast cancer known as anthracyclines. Anthracyclines, Dr. Ellis said, “are the drugs most breast cancer patients dread because they are associated with heart damage and leukemia.”

I mean, WOW. So maybe I have more in common with lung cancer and ovarian cancer patients than breast cancer survivors. Those two types of cancer are much deadlier, so that doesn't make me feel better. In the absurd land of cancer, I kind of liked being in the camp where a decent percentage of people survived for a long time. Moreover, it's possible that every single sentence that anyone utters about breast cancer--causes, risk factors, lifestyle fixes to prevent recurrence, treatment, survival rates--is completely meaningless for me and others like me.

And then, there's the thought I almost can't bear to mention:

Well, at least I might have done AC chemo for nothing. Taxanes might still be a must for triple negative--I do believe they are used for other cancers, such as ovarian, as well. But adriamicin? The one that gave Robin Roberts a potentially fatal blood disease that used to be called pre-leukemia? The one that just completely knocked me on my ass, sent me into early menopause, took my "epic" hair and made me so weak and skinny I couldn't feed my baby his lunch without using two hands? The drug that robs so many women of their fertility--forever? The one that can stop your heart?

It doesn't do any good, probably, for TNBC. Even when I was in treatment two years ago, there was a little bit of a sense that I had to do it because they didn't know better, nor what else to do for me. I was given "options," but none of them involved anything less than months of toxic chemotherapy. And the drugs that do work, these PARP inhibitors, have been around for a while--I remember hearing about them soon after my diagnosis. They were discussed as promising for TNBC but because no clinical trials had been done en masse, they weren't even mentioned to me by doctors. And now, since I'm almost 2.5 years out, it's probably too late. I sit here, itching to pick up the phone and call my oncologist and demand some PARP right now! but I know that he would say something along the lines of "that is not the standard of care today" or "trials are still underway" or "that is all behind you now." But, of course, it isn't behind me. It's right here with me, all the time. And the same woman who wants to pick up that phone is terrified that it might ring, because she doesn't WANT more drugs, she loves how her body feels now, and she wants to just be left alone to her chances.

It's hard to feel so many things at once, all the time, when you're just trying to live your life. I'm so happy that they are figuring this out, that future generations of women will not have to take treatments that cannot possibly help them, and that hopefully fewer women will die from a disease that has been around forever, but that is woefully misunderstood. I think about my daughter, and I might almost weep from relief, if I were a different woman.

But I'm not, so I sit here dry-eyed and think about some of the absurdity. About taking poison for no reason. About staying skinny and exercising in order to stop the chaos in my mind and the jumpiness in my body, not to stave off cancer--because, again, there is no evidence that those things help stop recurrence for TNBC. About how hard it is, sometimes, to relate to people. Because every day I do something that few people do. I just cross my fingers before I shut my eyes to sleep, knowing that I will at least wake in the morning.

I cross my fingers for one more day and that small action is as likely as anything to give me more wakefulness. I live in this Kafka-esque world, where I know that everything I have done, except for surgery, was a best guess fix for a what if scenario for a nameless disease.

And yet, I'm glad I did it--all of it. I did my best with the information available to me at the time. I did what I could, and more than I would have liked. And my body, my hair, my fertility and my sexuality came back to me. For a time at least-- for now. Who can guess when our best things will be taken away? It is useless to dwell on the possibilities.

And so I cross my fingers and bust my ass and on my best days, you would never know. On other days, like today, I feel grateful and I feel betrayed, I feel happy and I feel devastated, I feel afraid and I feel that it is impossible that I might not get to grow old. So, I write this. And then I move on.
Posted by Katy Jacob at 10:03 AM