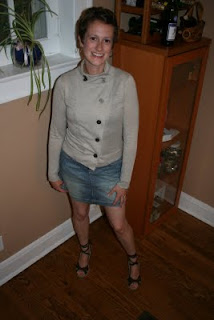 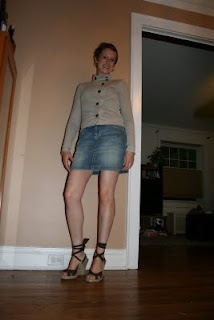 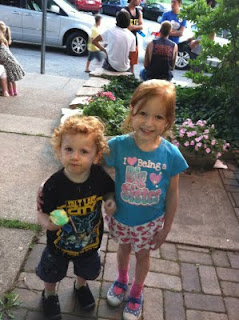 As I look around my completely disastrous house, filled with boxes, in a state of utter chaos as we wait to move, I find myself wondering if at some point in the last year we just completely lost our minds. I mean, really--at what point did we take leave of our senses, and decide to buy this new house with no clue when, or if, we could sell the other one?

I guess we decided to do it when the opportunity presented itself, cancer and terrible economy aside. I was reading an article in the Tribune today about how the current generation of young people are putting off major life decisions, like planning careers, getting married, and starting families, due to the economy. They are waiting for things to change, biding their time until the sun comes out again.

I was reading this story waiting for the part where it would make sense to me. This seems completely different from what happened to the generation that came of age in the Great Depression, when couples who grew up in the Depression got married after knowing each other for a week before he went off to war, when people continued to have children and try whatever line of work they could get and found out that life was actually really fulfilling anyway. Today, the options seem different--go to graduate school, wait, "turtle," hold out until things get better.

Maybe this makes no sense to me because I have never assumed that things would be better, I have never really had the expectation that life would offer me what I wanted. Shit, I have never really known what I wanted, outside of a general hope of happiness and a willingness to do what I need to do to support myself and those dependent on me. I never thought it made sense to wait, because waiting just means it's later, not necessarily better. So when I was young and single and making hardly any money I put myself through grad school and bought a condo. Why not? The worst that would happen is that I would fail and end up with next to nothing, and that was something I already knew how to do. I got married a year and a half after I met Gabe, which seems like a long time, but people have said things to us like "wow, what did you guys do, just go on a date and then get married?" as if we had some kind of shotgun wedding--at age 29. We bought a house when Gabe was self-employed and I had been at my new job for just a few months. We had our first kid relatively quickly. Now we're doing all of this crazy transitioning, right after going through one of the hardest things we could have gone through as a family--in the midst of that hard thing, actually--in one of the worst economies.

I wish I could tell some of these kids from the article what I didn't realize I already knew at their age. There never is a great job waiting for you, a perfect plan in motion for your family, a soulmate hiding around the corner. Granted, my goals were more basic, much more working class I suppose--I just wanted to graduate college, never having been married or pregnant, and I had no idea what else I should do if I succeeded. I didn't even expect to succeed, even though I had control over all of those things. I half expected for the other shoe to drop and the whole damn plan to go to hell.

But I knew I would work, because I had always worked, ever since I was around 11. I knew I would take an unglamorous job if I had to, because that's the only kind of job I ever really expected to have, even though I wanted to do other things. I had already had many of those types of jobs--including some that I really liked, such as being a secretary or a receptionist. When I actually ended up working at a job that coincided with my personal interests and mission, I was as surprised as I was when I was 14 years old and the boy I had a crush on actually had a crush on me at the same time. Boys had liked me for years, but never the "right" ones. When that finally happened, I thought wow, what a world, how strange is it that the person I noticed would notice me out of all of the other people there are to see! That's how I felt about working in the consumer advocate world I entered when I was 23. This is a job, and it's fun! I'm doing something I enjoy, and I am getting paid, albeit not a whole lot! But I never expected it. That's a different way to view the world.

I'm glad I never put anything off, never waited. If I had, I would never have this marriage, this family, these houses would not have waited for me. We might fail, I suppose, the market might never improve. But why would young people with everything to live for give up the chance of their own futures just because they might not get what they thought they wanted? They might not get that anyway, great recession or no. Some of the best things in life are the things you never planned to have, the dreams you never considered, the paths that just happened when the rest of your luck ran out.

That is some un-Katy, trite sounding shit and I know it. But I worry about how my kids will interpret their lives when they are being brought up in this upper middle class family, where they have everything they need for the most part and thank God they have not suffered much, but for the suffering I brought upon them with my cancer. I feel like everything I am, everything I've learned, has been due to something bad that happened to me, and yet I don't ever want anything bad to happen to my kids. So how will they learn to lean on themselves, to understand that life never had a plan for them, they have to plan something for life, and then be willing to just wing it? I hate all that shit about triumphing through adversity, but maybe that's what's going on with some of these college kids right now--they don't have experience with adversity, so it scares them, and they wait for it to go away.

Dealing with difficult shit is one of the only things I know how to do well. I would never say that I am not scared of things, but rather that fear is also something that I understand. I just feel like neither fear nor suffering should stop you from trying the next thing, since the alternative is not much of one. If there isn't a next thing that will happen in your life, it's because you're dead or in prison or some other inexorably bad thing has happened to you.

One of the things I ask myself when I have these strange motherly concerns or deep thoughts is, is it some kind of cosmic joke that I am someone's mother? Do I really have a clue how to do this? I call them rugrats and swat them on the butt and kick them out of the kitchen. I yell at them when they whine. I walked around bald and made them deal with the consequences of people's reactions to that. I was never really prepared to do this. But I did it anyway, and here we are, and sometimes we get a moment like we had today when I was looking at a picture of myself from a year ago, when I was bald and smiling into the camera though I felt completely inhuman, and Augie ran up to me yelling, picture of mommy! pretty mommy! As if every two year old son had seen such pictures of his mother, as if that was no stranger than the alternate perspectives shown here, mommy with the long legs and proportionate mommy.

If I had waited, that moment with Augie never would have happened. Here's to hoping something similar will come out of this crazy, potentially stupid, house decision. Some moment that makes the chaos worthwhile, because some strange and specific beauty will come out of it. Look, I'm not being sentimental. I will always be a person who had cancer as a young mother, wife, daughter sister and friend, no matter how long I'm around. My kids will always be the kids of that person. Maybe someday, whether or not I'm around to see it, they will dig deep and remember how our family did what we did during this cancer time, how we just kept looking at the next thing. And they will not be afraid, or they will be, but they won't wait to do whatever it is they're afraid to do.

I have no idea why I sat down to write this blog, because I ended up somewhere entirely different. But that's what I hope for my kids, oddly enough, that they don't go through life with expectations, but rather with the opposite of expectations--that their lives are filled with some slightly off-kilter anticipation. I hope they just go ahead, my God I hope they just DO something. I can't expect to be there to see what it is they do, but then again you never know. Maybe I will be, and wouldn't that be a trip? We'll just have to wait and see.
Posted by Katy Jacob at 8:40 PM