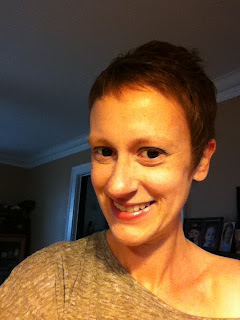 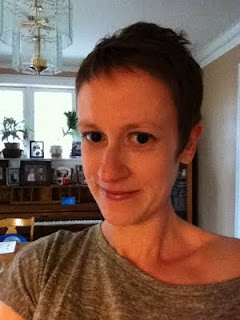 There are some things in life that only a fellow cancer patient/survivor can understand. For example, only someone who has stood in my shoes can understand the simultaneous thrill and terror associated with that first post-chemo haircut. I've been talking about this for a few weeks, because while I like my hair in general right now, it is too short to do anything with, and yet long enough to be unruly and stick up in strange ways. I don't like having to try to tame it with gel, since that makes my hair look brown. If the sun ever comes out here in Chicago, I think my hair will look just as red as it ever did. I want to be able to style it without killing it with hair products. So I took the plunge and called my old hairstylist yesterday. I was thinking about going to a woman I know through pilates who is also a breast cancer survivor, but she couldn't do it today, and once I made up my mind I had to go through with it.

Because I was really close to chickening out. It took so long to get just this much hair, I was terrified that someone would ruin it and make me look ridiculous right at the point when I actually could pretend that I chose this hairstyle on purpose. Ladies with breast cancer, you know what I'm talking about. Another friend who went through this at the same time as me saw me today, asked about my hair, said she wanted to tame hers too, and then said "but I'm kind of paranoid about letting anyone touch it, you know?"

Boy, do I. When I called the salon yesterday, they only had a noon appointment for me today, and I needed to get out by 1. The owner asked if I was just getting a trim like usual (usual being the three times a year I used to get my long, curly red hair cut, when everyone in the salon would gather around me and gush about how beautiful it was). I said well, here's the thing. I was diagnosed with breast cancer last year. I was bald for a long time, and this is my first haircut. I have no idea what to do with it. There was a pause, but she played it off well. She asked me how I was doing, said I'd be in and out in no time, hung up the phone.

I took a walk today and on the way back headed into the salon. I walked in and the two ladies there, the owner and my stylist, just looked at me. Hi, it's Katy, I said. Oh my God, my stylist gasped, eyes all big, I didn't even recognize you. Yes, well, it's been quite a year. Oh you look so great! Your hair is cute! And all of that. The surprise was just so palpable. After she finished cutting my hair the stylist said that she was told the whole story yesterday, and she said, oh ok, but then when she saw me, it dawned on her that the owner was telling her the truth, and it registered.

The haircut itself took about seven minutes, I swear. I showed her a picture of Emma Watson and said, I know mine is shorter than this, but this is the general idea. She said yes, your hair is too short to do that, but we can add some texture to it and clean it up a little. She washed and conditioned it (60 seconds tops) and did some demure little snips, put some pomade in her fingers, scrunched my hair around, and we were done.

I decided I really liked it, regardless of how similar it looked to whatever the hell I was doing to my hair myself. She actually comped me the haircut and half a jar of pomade. I was about to argue, but then I thought, nah. She wants to give me this free haircut because the whole thing is freaking her out, she's only about 25 years old (though she has two kids) and all she could do was say, wow, wow, as I was telling her the story (she asked me lots of questions). There are times to get your pride up, and there are times to just let it go.

The owner wanted to hear all the details. She has a friend who has had breast cancer twice--once at 18 and once at 28. She is now 35 and just had twins through IVF. What a terrible story, and yet what a great one, since that is 17 years later and she's still around. I absolutely can't imagine having breast cancer as a teenager. What a fricking nightmare. It's also hard for me to relate to these positive stories of long-term survival though, since she wasn't triple negative. I just tell myself that I was stage one, so I have that going for me. At least I got to go to college, date, get married, have kids, and do all kinds of things without knowing about my breast cancer. Eighteen. Jesus!

Ever since I got home (I had to walk home in the rain, which kind of ruined my hair since I had no umbrella, but I took these longarm shots with my iphone anyway. I look kind of like an alien with those big eyes and that weird lighting and iphone "mistiness," don't I?) I've been thinking about how it's been a while since I've experienced that shock and awe about my appearance. I was so used to it when I was bald, that it reminds me how quickly we forget how difference feels when we are given a little bit of normal. No one stares unduly long lengths of time at my head anymore. In the same vein, I can sleep now. I used to feel that I would give my left arm for 3 hours of sleep. Now my chemo insomnia has passed, my hot flashes are gone. If I have trouble sleeping, it's because I'm worried about normal life-type of things, or about cancer things, or because I ate a brownie for dessert or had coffee after noon. I can hardly remember what it was like to be so desperate in my insomnia. My sex life is normal, and hinges more on things like whether people are exhausted from the kids or sick with the flu than anything else. I don't wear camisoles anymore to absorb the goop I had on my chest during radiation, or to use as a final layer when I tore off all my other clothes in a fit of hot flash rage. My nose is running all the time with this spring cold, and when I get frustrated or scared I tear up a bit. How is it possible that six months ago my body was just a bone, dried to the core, unable to produce a single tear?

I want so badly to hold onto this, for this part of my life to be real. I would love to not show up at my three month checkup with the oncologist Tuesday. I would love to ignore my mammogram at the end of the month. I am so afraid they will tell me, psst, hey Katy, April Fools! You thought you were going back to normal but really you have CANCER! It's BAACK! I have nightmares about this. I almost put off the haircut, thinking, what's the point if I just lose all my hair again? I almost put off other big decisions too, realizing that we are changing so many major things in our lives right now and you aren't supposed to do that when you go through something like cancer. It is too much for the system, too traumatic, we've been told. I mentioned this to Gabe and he laughed, "that's not really the way you work, is it? Feast or famine!"

It's true I suppose. That's how we started our lives together. We got married almost exactly a year and a half after we met, and in that time, I had switched jobs and we had bought a house together and gone through the nightmare of selling my condo. Gabe stood up as a pallbearer in my grandfather's funeral 7 months after we met. I graduated from grad school a month or so after our first date, and I was of course working full time while I was in school (I worked two jobs when I started grad school). Life just kept happening, wham, there it was. Within three and a half years of knowing each other, we had both switched jobs (Gabe once, me twice), bought a house in a neighborhood neither of us had ever even visited, gotten married, had a kid. The funny thing is, Gabe wanted to wait to do many of these things, and I didn't.

I guess it's a good thing I usually win the arguments in this house.

If I hadn't been all feast or famine about our lives, we never would have lived here, never would have had kids. My cancer was growing right along with my belly after Lenny was conceived, as far as we know. I wish I could say that cancer taught me not to put things off, not to be afraid. But I am not living my life any differently now that I ever did. I am a person who is afraid of things, afraid of change. I'm just not a person who doesn't do the things I'm afraid of anyway. Some people say that's courage, but I think it could also be lunacy, or at least extreme stubbornness. So when Gabe said let's wait until we're 35 to have kids, I said ok, you go ahead, but I'm not doing that. His response? OK, fine then. And there I was at 29, pregnant, feeling like that was old to be pregnant the first time. Well, I guess, winning that one was easy!

Deciding to do it was easy, doing it was another matter, of course. Having kids is so much like everything else, because it is like nothing else. You are never prepared for it, no matter your age. You are scared, and excited, you have no idea what you're doing or what it will be like. It's acceptable to mention these things about parenthood. How normal is it to say it feels the same way when you take a deep breath and open the door to a salon to have a woman ten years younger than you cut your crazy baby-hair so you can feel like a normal participant in society? How normal is it to take that deep breath all the time, several times an hour, to make yourself forget that mammogram that's lurking in the middle distance?

It's as normal for me to do that as it is to sleep, to be seen in public as a woman who doesn't look like she had cancer, it's as normal as fear and excitement and dread and happiness. On the one hand, it's just a haircut. On the other, isn't everything?
Posted by Katy Jacob at 8:01 PM