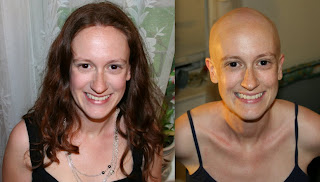 As a warning, if you are looking for a chipper cancer blog, this ain't it. This is a heavy one, and I will not be offended if that turns most people off from reading it. Don't worry, I will keep it together in the long run, but this is where I'm at right now and I need to get it out.

Back when I found out I needed a second surgery, I started my blog by saying that this is not the blog I expected to write today. Well, I'm back in the same boat. I was going to update on the many ridiculous things that chemo has brought into my life. On Monday, after I wrote last, my nausea was so bad that I gave in and tried the last anti-nausea medication they had given me back on July 7, which I had never used. Within 45 minutes of taking it I was vomiting uncontrollably. This was happening as Gabe and the kids were pulling into the driveway. I was going to write about how after chemo #2, I didn't eat hardly anything for almost a week and I got down to 110 pounds and was so weak from the lack of food that I couldn't stand it. About trying acupuncture again, this time for nausea and the extreme stomach pain I was feeling for days. About how all of my mucous is gone, everywhere, in my body. About how excited I was to be able to eat last night and today, and to see the scale get back to 113. About meeting with the radiation oncologist and finding out that I am not a candidate for a reduced radiation schedule because the one DCIS tumor that I have (stage 0 cancer) happens to be grade 3, unlike my other grade two tumors, so I will need to do the full 6 and a half weeks.

But I'm not going to write any more about any of those things tonight. I can start by saying that chemo has turned my body into a bone. I don't even have tears anymore. I was down and upset the other day and I started to cry, but very little happened, and not for lack of trying. Just a few drops. I thought it was some kind of metaphor until I realized it was just the extreme dryness brought on by chemo. I have never wanted a good cry so much in my life.

I have just spent the last hour with my husband, having my little buzz shaved off for good. I really liked it for the two weeks that I had it, more than I expected. I felt comfortable going out in public with it. But I couldn't stand how it was coming out constantly, even while I was brushing my teeth, even while I was wearing a scarf. My head was hurting all the time with the little hairs pulling, making it hard to sleep. I was starting to look like I had mange. So Gabe got his new clipper set out and went to work. I just looked more ridiculously mangy and we both agreed that wasn't good. So then he got out the Barbasol and safety razor and started a long slow process of shaving my head smooth. I started to cry those dry tears and I'll admit I'm doing it even as I write. What kind of fucking medicine makes it so that you can't even really cry? Gabe is more of a cryer than me by a large magnitude, so that started him off as well. There we were in the bathroom, both crying, hair all over the floor, my hair all over his shirt. He said he never had a father to teach him to do this right (to which I wanted to say, do fathers and sons often shave each others' heads? but you know, I don't have an answer, being a girl), and even if he had, he never in a million years could have pictured himself doing this with me.

There's the whole in sickness and in health part of your marriage vows. But then there's standing in your basement bathroom with your wife wrapped in a towel, sitting on a stool, while you shave off all of what's left of what used to be her really pretty hair and then you take the expensive after shave that your mother in law gave you for christmas years ago and rub it all over her head, feeling guilty that you gave her razor burn. And you tell her that she looks sexy, though she knows that's a lie. Some might say that that is real love, or devotion. And I know that it is. But it is also a reminder of what marriage is not supposed to be at this age, or at any age. We should have been watching a movie together, having sex, arguing, cleaning the house. We should have been doing something else.

I feel like that's what it comes down to--I should be doing something else besides cancer with my time. I don't feel sorry for myself but it is just hitting me over the last few days what a colossal bunch of bullshit this is. And now how will I go out in public? How will I do what I've been doing and pretend to be a somewhat normal person? Maybe in a few days I won't feel so bad, who knows. This is the first time since I received my diagnosis that I have felt regret. And yet, I don't know what else we could have done. My damn stubborn hair was coming out, but SO slowly. It could have taken days, weeks, and I would have had that stinging pain all the time, reminding me, and I would have been left with less and less patchy fuzz. So maybe I should ask for another vote. Do I look so ridiculous that I can't go out in public like this, a totally bald woman who can't pass herself off as edgy anymore but is screaming, look I have cancer! Do I need to cover up? Because now there's no going back, not until the roots come in many months from now, so I need to know how to behave.

That's the other lesson of tonight I guess. There's no going back, not with any of this cancer shit. I've started chemo, wanted to stop, but why? Because I don't want to keep suffering for the next three months, but the poison's already in me, so what's the point in stopping? It would piss everyone off, make people worry about me, and leave me with no other options because of this damn triple negative thing. So on I'll go.

And there's no going back to how things were before, even with the kids. Augie turned 14 months old today and it's been breaking my heart now that I've had time to think about how things have changed with him. I stayed home with him for the first six months of his life, and I was pretty much his world. I was still nursing him often when I had to suddenly stop within a week of my diagnosis. I'll never forget his confusion when Gabe went in the second morning in a row to feed him his first bottle of the day. My one child who could actually nurse well! I had to pump all the time for Lenny--she wouldn't have known the difference if I stopped nursing. But fate doesn't care about those ironies. Augie still drinks a bottle better from me than anyone else, but it's not the same. And then there are the other things. After weaning I had two surgeries, which meant I couldn't pick him up for some span of days. And now I am so tired and weak--or at least I am for the week after each infusion, before I get a week's reprieve of feeling "better," that I can't chase him around, or I have days when I'm so shaky I can't pick him up. And now, the kid who calls his pacifier his Mama, reaches his arms up for Gabe to get him. He throws tantrums sometimes. I think he doesn't trust me. He loves me and he likes me, but he doesn't understand what's happened. I know he will never remember, but that's not the point. I will. I will always have that, the understanding of how cancer changed my relationship with my only son, my second and last child.

And then there's my daughter. What will Lenny say when she sees this head tomorrow? We were looking at a picture in her room, in a frame that says Mommy and me. I said we needed a new one because she's not even two in the picture. And she said, well, back then we didn't even know you had cancer. And you had long hair. Besides my shock at her saying "we didn't know you had" cancer (I probably did have it then--but how did she know that? shouldn't she have just said, back then you didn't have cancer?), I just wanted to cry again. How she wishes I was the way I used to be, or at least that I looked that way, as I do in the first photo you see here, taken just days after my diagnosis.

I think the image of me and Gabe in the bathroom sums up how some things have changed there. And things have changed with some of my friends, in good ways and bad. Some people are around less, and others have come out of the woodwork. I've heard stories of people I didn't know that well in high school finding out about me and sobbing. While that seems strange on one level, I get it. I know that this is really touching people who knew me as a kid, as a teenager, and it must be weird to think about someone you best remember as your childhood playmate, your junior high girlfriend, that testy girl in college, having cancer. Part of it is because you think, well shit, we really are all going to die, and part of it is that you think, well wasn't that just yesterday when we were 17?

And in a way, it was. But in another way, time just passes and passes. I'm just hoping I have a lot more of it to pass through, though in my darker moments like today I wonder. I wish time would speed up and get me through this cancer treatment but I know that won't happen, and even if it did that would just be more time I couldn't get back.

There are a few people in the world who will understand what I'm about to say. This whole cancer thing right now seems like the last two lines in Robert Creeley's Kitchen.

Perpetually sweeping this room,
I want it to be like it was.
Posted by Katy Jacob at 9:56 PM