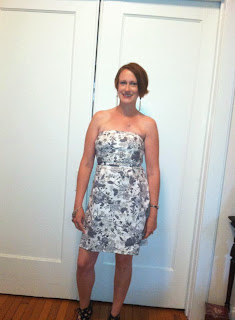 A year is enough time to reflect on, usually. Usually, a year signifies beginnings and endings. Seasons change. People change. The time goes by too fast, or not fast enough.

I'm not really sure what to say about this past year.

A year ago today, I got that phone call--again. Before the call came, I already knew I had cancer. I knew the day before, when I laid down on the biopsy table for the second time in my life. I had already cried, already gotten drunk.

The thing I had been afraid of for three years--well, the penultimate level of that thing--had happened. And though I couldn't know it then, by it happening, I was released from the fear of it happening. I was also released from the status, or the burden, of being a "real" cancer survivor, as the lexicon of cancer survivorship does not really extend to multiple outings.

A year ago today, I didn't know if my cancer was localized or not. I didn't know if I had mets. I still don't, and I still live with the one in three chance that I will develop it, at which point I would have an average 28 months to live, though it is often much shorter for triple negative disease. A year ago, I hadn't yet done the bone scans, MRIs, CT scans. I hadn't learned that I would need to do chemo again.

I spent seven of the last twelve months in active cancer treatment or recovery from surgery. This time, we were significantly more isolated than during my first cancer. Some people grew afraid of me, some people grew tired of me having cancer, some people seemed to think that I could handle everything just fine and therefore wasn't really sick. I know it's not kosher to say that, but it's true. Obviously many people did not feel like that, and we have wonderful family and friends. But those who have dealt with such issues understand the importance of discussing those losses, and whether it is true or not, we felt that we needed to go it alone this time. And we were so busy trying to manage our lives, and my new job, and our children, and I was so hellbent on just powering through, that it was hard to see the little things that were happening as they happened. 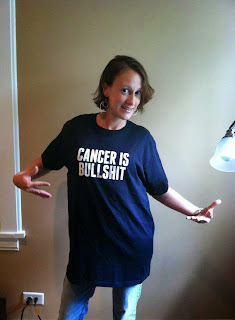 I knew I had vertigo, but I didn't realize how bad it was. I could not sit on my bike at the gym and move my arms off the handlebars to stretch without falling. It took a while to realize my hair was thinning. That whole chemobrain thing took me by surprise. My depression, my PTSD, they seemed superfluous, extravagant, like things I didn't have a right to have. That necrotic flesh over my mastectomy scar, the D&C, all the things that happened, they became these strange little stories that were not so far afield from discussing weekend plans.

I lost a part of my body. It's strange, but I don't miss it, and I don't want it back. I know how many women look and feel disfigured and alien to themselves after breast cancer. I don't know if it is because I had amazing surgeons, who left me looking as normal as possible considering, or if it is just because I have stopped caring about how I "should" look, or a combination of both, but I have adjusted just fine to this new body. Of everything that's happened, losing my breast has been on the lowest end of the spectrum of important things. I looked at this new body the morning after the surgery and said: Huh. That's not so bad. And maybe by saying that, I believed it, and it led to this place where the strange round nippleless lump sitting on top of my sternum and ribs that are down to just skin and bone, making indentations in my chest, can look simultaneously alien and just like me. My husband was telling me how much he loved my body recently, and he touched my implant and said: "And this? Even this. It looks like you now. That's your body now. That's your skin." 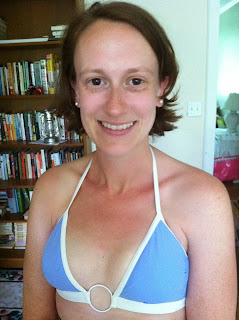 (This picture was taken the night before my mastectomy.)

It's a skin I feel comfortable in, and it's one all my own. This year has been cold and dark and hard, but not all the time. It's always colder, darker, and harder somewhere else. There will be another time in my life that will be ice and blackness and Sisyphus' stones compared to this.

But I've said it before in this forum and I will say it again--not yet. Not yet. 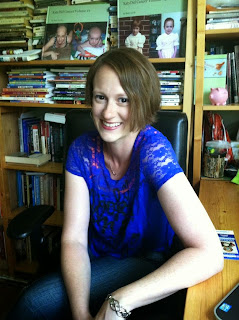