Day 932: Chemo: The Gift That Keeps on Giving 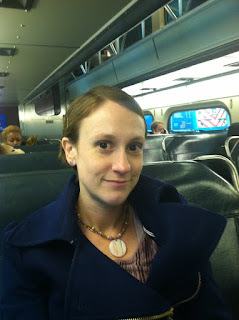 Just so you know, one of the more aggravating things about being a breast cancer survivor who has done the typical trifecta of treatment--surgery, chemo, radiation-- and is lucky enough to still be alive a few years later, is how everyone assumes you are "done" and completely back to normal.

Now, most people realize that you are forever changed, even if that is hard for them to say out loud. But the assumption is that you have made it, you beat it, and, well--you're done.

So it is with chemo. Chemo was so hard on me, and so much bullshit happened, and yet, I have recently realized that my body actually handled it amazingly well. I see what other people go through, and that skinny bald girl with no sweat glands who refused most side effect meds seems like some kind of superhuman now that there's some distance between us.

There were all the random signs that my body was extremely angry with me for poisoning it like that, and I did have the heart scare (which turned out to be an allergic reaction to taxol, no matter what any doctor says) and my WBC count did plummet that one time, making me unable to do the sixth chemo session on time. But I bounced back even from that all of five days later. I never had neuropathy, nor chemo brain. My weight dropped but not precipitously. I remained active. I never got too tired to function, even with the morbid insomnia when I didn't sleep at all for five days. I never needed a blood transfusion. I got over menopause. I didn't even burn badly from radiation. And once I was given some physical therapy, I was once again able to do all kinds of exercises that a lot of able-bodied people who haven't had cancer nor chemo can't do.

I was, I suppose, lucky. Or maybe just really healthy, and young, so I could withstand the poison. Who knows? I guess it doesn't matter why.

But chemo changes you, not just through the Kafka-esque experience of it all or the baldness or the way people treat you like you are someone else. It actually CHANGES your body. For example, I really did used to have all of my toenails. Why three of them decided to wait to fall out until two years AFTER chemo, when many people lose many or all of them DURING treatment, I will never know. But there it is. A reminder.

And I have been going back and forth about whether or not to write about the absolute most depressing aspect of cancer treatment that I have dealt with--the seemingly inevitable return of early menopause. I really thought I had beat that. I have voiced my concern over the Flowers for Algernon effect of knowing what I know now about menoapuse, and never wanting to go back, knowing that I inevitably will someday if I live long enough.

My cycles are short--one sign of perimenopause; my last cycle was only 19 days long and that left me so depressed as I thought of the implications that I just sat down and cried. Even with these new cycles, for a long time, my raging libido was back and I was my old self, sexually speaking. Now...it's different. Nothing is gone nor terrible but I have my days, or weeks, when sex is difficult for me the way it is for many women. I feel completely alien to myself in those times And I am raging against what this means for me, and I am filled with anger over having to kill my healthy ovaries, and I live in fear of what it will be like to have hot flashes every ten minutes all day long again but this time there will be no treatments (not allowed for breast cancer patients) and no end in sight. Call me dramatic. I don't care. It upsets me enough that I can't say any more about it.

I can, however, say something about that gum surgery I had yesterday.

At some point I wrote about how one day, in the middle of AC chemo, I took what I thought was a piece of food off of my front bottom tooth and my entire gum came off. I had an emergency dentist's visit, and was told that it might regenerate. Around Thanksgiving this year, so more than two years later, I realized there had been no regeneration and that sometimes my tooth hurt. I didn't want to lose the tooth, so I went to a few different peridontists, both of whom told me I needed a tissue graft to shore up the tooth and protect it. I dreaded the very thought of the surgery.

And I was PISSED. AC chemo can do a number on your mouth. I remember having to use the mouthwash for dry mouth and using the special toothpaste because I had no saliva left. Do you know how dangerous that is? It doesn't sound bad, but let me tell you, IT IS. Some people lose their teeth or just watch them crumble along with their toenails. People get horrible mouth sores. So, I had this stupid gum thing, and it was probably not that bad in the scheme of things, but it was, and is, a REMINDER. And that seemed bad enough.

I did my research on these grafts. One of the doctors suggested I get the surgery using cadaver tissue. OK, yuk, right? But that seemed like a better alternative than dissecting the roof of my mouth and leaving a gaping wound there to get infected. However, it's very expensive to do it the cadaver way, and that office never bothered to keep in touch with me, so I made the appointment with the low-rent local office that wanted to go old-school.

I considered ways to get out of it, right up until the bitter end. It seems absurd, considering how many things I've been through that are worse. I mean, I've delivered babies for Chrissakes. I've had CANCER. Who cares about mouth surgery?

But it's like something out of a horror movie, right? There's just that memory of Marathon Man in my mind. Yikes.

But once I was there, I don't know--it wasn't that bad. He only used local antisthetic (a hell of a lot of it, as we redheads require more anesthesia--seriously, true story), and the whole thing took maybe 20 minutes. He put a washcloth over my eyes "to protect them," though I'm sure that was code for so you can't see what the hell we're doing to your face. Of course, I could see out of the corner of my eye, so I watched the whole thing.

As an aside, I've always been like that. Medical procedures fascinate me. As a child, I would watch them draw blood during routine checkups for epilepsy. I watched the seven core needle biopsies done with the 15 inch long, half inch wide needle. I watched the chemo course into my veins. I stared at the raw wound on my arm when I was burned at 19 and it was being professionally cleaned.

So, I watched as this dude stuck a scalpel in my mouth and cut open part of my flesh, placing it on another part and threading a few needles into my mouth for stitches. I watched him as he asked his assistant to "dab," meaning wipe off my face--up to my nose, close to my eyes in fact--because of all the blood that had spurted everywhere. Then I watched him put some silly-putty looking stuff over the wounds, though some places actually give you a retainer or something. Again--old school.

Afterwards, I waited for Gabe to pick me up (I had walked over to the office) and sent him over to pick up my antibibiotics (I informed the doctor of the one that I know I am not allergic to--they should just let me write my own prescription at this point). I went to get some ibuprofen from our medicine cabinet only to find that we had none. I had refused the narcotic painkillers--can't take codeine, don't like tramadol--and let me tell you that shit HURT. I kept calling and texting Gabe but he wasn't picking up because apparently he'd left his phone at home. I wanted to kill him when he got home, but he had picked me up an US Weekly, along with The Bourne Legacy and Ted to watch from bed, so I couldn't be that mad. Plus, he found the ibuprofen. I was in a lot of pain; I felt like I had been kicked in the mouth, but you know what?

It really wasn't so bad. I could even eat today on one side of my mouth. I did some conference calls for work. I went to the gym today for a spin fusion class and was almost happy that the pain in my mouth distracted me from the pain I always feel in my chest, or the pain I felt today in my hips because it's a very strange, rainy January day.

Does it hurt? Sure. But I've had so much worse pain, this barely registers on the scale. I didn't take any painkillers at all until late in the afternoon. So, I probably should have done this sooner, honestly, if I hadn't been so damn annoyed at the very thought of having to have surgery because of chemo years after chemo ended.

So this is just to say that the poison that you ingested can stay with you, for a long, long time. That fact is part of what it means to be a breast cancer survivor. And sometimes I write this blog just so I can tell it like it really is, no matter how little people would like to hear it.

It stays with you in ways large and small. When the mail comes, I wonder who the genius is who still sends me Victoria's Secret catalogs, and I decide not to renew my Glamour magazine subscription after almost 20 years because there's so much stuff in there about HAIR and other things that just seem pointless, though it does teach me that this permanent bedhead look I have going on could maybe pass for stylish. And I have to have surgery, and I will probably go into menopause many years before I should, and none of this would have happened if those little tumors hadn't decided to rock my world a few years ago. It is what it is, I suppose. 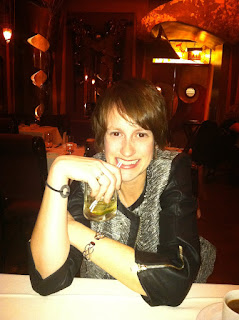 Here's to healing, for now, and for as long as I get to keep the feeling.
Posted by Katy Jacob at 8:47 PM