A few cancer survivors I know recently posted a great blog by a woman who nailed many of the ridiculous things that people say to women with breast cancer. It’s one of those “it’s funny because it’s true!” situations. She gave the answers and responses that we would all like to give voice to but never do because we are too polite. And that made me think about the theme that I started with the last blog:

Why are we sorry that we have cancer? Why do we spend so much time and energy trying to protect other people from our daily reality?

I will admit that one of the things I am proudest of about myself is that I’m not a “nice” girl. I never worried about being polite to boys, never cared if people thought I was overreacting in a situation I didn’t feel comfortable in, didn’t have a problem fighting back or acting like a crazy person if I needed to do that. I’ve always been pretty good at standing up for myself and telling people when they’re being shitty. And yet, I don’t like to seek out confrontation, and I’ve often used my relatively thick skin to just let things slide off me, figuring it wasn’t worth it to start something or get involved in unnecessary drama. If someone says or does something insensitive to me that is not actually dangerous or grossly disrespectful, I usually just shrug and bitch about it later. I don’t hold grudges most of the time. I tell Gabe right away when he pisses me off—I never do that “you should know why I hate you right now!” crap. You get the picture.

I also learned at a young age that sometimes people say things that are just short of stupid because people really have no clue what to say, and you can’t blame them for that. In fact, sometimes it’s a blessing. Back when I was in a wheelchair, when little kids asked me what was wrong with my legs, or why I couldn’t walk, I actually appreciated the honesty. It was a hell of a lot better than adults asking my parents (right in front of me, as if I wasn’t there): What’s wrong with her?

Um, not much. What’s wrong with you?

When a cashier would ask, has anyone ever told you what beautiful hair you have? Or a man would ask, has anyone ever told you that you have amazing legs? I would always think, well of course. I wasn’t born yesterday and if you are noticing it someone else has noticed it before you. But no one says something so incomparably bitchy. My mom taught me that just because you’ve heard it a thousand times, it’s the first time that person has said that to you, so keep that in mind, say thank you, and just keep walking.

So it should be when people make the obligatory cancer gaffes. And yet there’s something more going on, something deeper, when we as survivors let those comments go. There’s this guilt, especially if you’re a young cancer survivor. I felt this guilt the first few times I went to the cancer center for my pre-surgery appointments and my initial visits with the oncologist. I still had hair, and I looked so healthy, and my handsome husband was with me, and all the older women wearing wigs looked at me with such sadness. I wanted to say, I know, I’m sorry, I shouldn’t be here, it’s depressing, even to you. I felt guilty around the doctors who seemed sad that I was there. I felt that guilt when my friends didn’t know how to behave around me, when people would find out about my cancer for the first time and be floored.

Don’t get me wrong—I got over it and just did what I needed to do, baldness and skinniness and no eyebrows and all. And I never have used my “I don’t have cancer of the face” retort when someone has told me I look great. I’ve always felt like I’ve protected other people’s feelings from my own innate trigger reactions and said the socially appropriate thing. And yet, I have been in the same shoes as every other cancer survivor I’ve met—especially those who choose not to hide it in various ways. You end up having to make other people feel better about your situation, comforting them when you would think they would comfort you. It’s weird. I don’t think there’s a real solution to this problem, outside of everyone having something extreme and physically challenging happen to them as a child so they have some sense of empathy and lose their sense of immortality and indestructablity, but I do have a few thoughts of my own to add to the shit people say to people with cancer lexicon. Maybe this will help you understand what I’m hearing, what other folks with cancer are hearing, when you say certain things. I’m not trying to be a bitch here.

Oh what the hell, yes I am. I don’t care if you think I’m a bitch. I write this blog so I don’t have to say this shit to people for real.

I have heard all the following things in the past not quite two years—no joke. Often these things were said by well-meaning people I actually like, so I know it was just a matter of shock and sadness that led to the gaffe, and I understood and didn’t take it personally. On the inside, I was making the same face you see here on surprised, 16 year old Katy: Holy shit no you didn't! Other times, people making these statements made me kind of hate humanity as a whole. AT those moments, I wish I could just do like Miss Piggy, and kick everyone's ass with my gogo boots. 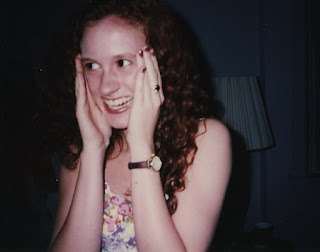 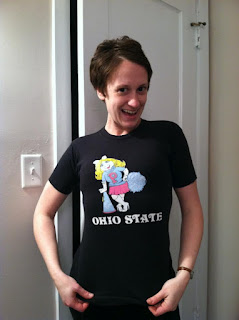 So just know that when you say this, I think this:

“Oh my god my aunt died from breast cancer and it was terrible.” “Wow, I’m sorry, especially since she is rolling in her grave right now wondering what the hell happened to you to make you say something like that.”

“I just don’t know what to say.” “Well you should probably figure it out, since one in every seven or eight women you know will have breast cancer at some point. Include yourself in the seven or eight.”

“Does that run in your family?” “No, unfortunately I am doing nothing to improve the gene pool by potentially dying from cancer.”

“Did you have any risk factors?” “I know you are asking me if I’m a fat drunk coach potato, and honestly right now it seems like I might as well have been one for all the good the good living did me. Or do you mean risk factors like being female, having breasts, and going through puberty early?”

“Oh shit will you lose your hair?!” “Oh shit I guess so! I never thought of that!”

“Is it the bad kind?” “Nope, it’s the happy pink fuzzy love kind of cancer.”

“I’ve always worried that I will get breast cancer.” “Not me. I’m really kind of worried now that I ACTUALLY HAVE IT.”

“At least you’re already married.” “Yes, indeed. And thank God I never even considered marrying you.”

“My friend had a scare once.” “Wow really? Hey I know some people who had tangential relationships to bad things that I’ve heard have happened to other people’s cousins.”

“I thought you’d been looking a little skinny and tired lately!” “Um, early stage breast cancer does not make you lose weight or feel sick or fatigued. Those things only start to happen when conversations like this lead to chronic nausea and insomnia.”

“You could get brand new bigger better boobs for free!” “You moron, reconstructed breasts have no nipples, did you know that? Also, in my opinion there is no way to improve on the breasts that I already have, except to remove the damn cancer growing in there. They are awesome and I am so glad that I never let you touch them.”

“You know what you should do?” “Yep: panic. It is definitely time for panicking.”

“Wow, and you’re such a beautiful young girl.” “Not for long!”

“I’m sure it won’t be that bad.” “Actually, I’m thinking it will be a colossal pile of bullshit that will go on for years, and that’s only if I’m lucky.”

"Only black women get triple negative breast cancer." "Well shit. All this time I've been living a lie."

“Can you still have kids?” “Due to the type of cancer that I have, yes, but only by putting myself in grave peril and potentially increasing the chances that the kids I have will grow up motherless. Thanks for reminding me.”

“You are a fighter, so you’ll beat this.” “This is not a boxing match or a game of chess. You can’t just shimmy away from it or outsmart cancer. Cancer doesn’t care about the content of your character. If it did, I can think of a lot of people who would have cancer besides me.”

“What’s your prognosis?” “I’m going to die. Eventually. In the meantime I’m doomed to answer inane and borderline offensive questions in parking lots.”

“They have classes that teach you how to put makeup on when your skin starts to look really weird and you lose your eyebrows and everything.” “They also have etiquette classes for people with no social graces where they teach you how to get a clue.”

“I didn’t think you could get breast cancer if you were breastfeeding.” “WHAT?! Why didn’t they tell me that?! I demand a DO-OVER!”

“I knew you’d make it!” “Really? Haven’t made it yet. In many years, if I’m still around, I guess I made it. Then I get to revel in the fact that because I had breast cancer before age 40, my chances of getting a second type of cancer go up by 300%.”

“Of all the kinds of cancer to get, I heard breast cancer was the best one.” “Totally, dude. You get to join this really cool club of women everyone thinks they understand and no one actually knows shit about.”

Oh, I could go on, but I shouldn’t, lest I alienate everyone who actually reads this blog. There are a lot of things that people have said to me that have absolutely gotten it right, and don’t think I’ve forgotten: I’m so sorry to hear that. Can I do something? Do you need help with the kids? How’s Gabe holding up? We’ll figure out a way to be flexible so you can keep working. My mom is a 20 year breast cancer survivor. Oh wow, what a bunch of shit. That’s unfair. Keep your chin up Katy. I’m here for you. Just do what you need to do and don’t pay attention to what anyone else says.

Then there are the people who just keep talking to you anyway, about other things, like you’re a normal person. There are the people who just show up at your door and hang out with you. If you don’t know what to say, just do that. The little bitch inside every cancer survivor I know will remember you for it, and if the horrible happens and the tables are ever turned, she’ll be the first to come to your house and overlook everything else and just talk to you. I promise.
Posted by Katy Jacob at 2:59 PM