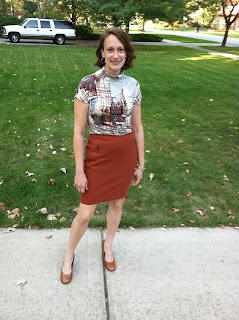 So last night was my 20 year high school reunion. I went to the 10 year one, which was kind of an unmitigated disaster due to the fact that it was held at a bar in Wrigleyville the night of the infamous Cubs/Bartman game. If you don't know what I'm talking about, you aren't from here. There was basically a riot outside the bar, and all kinds of drunken aging frat boys infiltrated our reunion, so when my boyfriend of 6 months came to pick me up, he wondered if I had been chain smoking or something due to how hoarse I was from all the yelling required to talk to some people. Just a few months later, that boyfriend became my fiancee, and isn't that how time works? You just don't know what's going to happen until it happens.

This time, we met at a bar near our high school, and the music was too loud and I still sounded like a dragon lady due to the yelling, but it was a wonderful time, and it got me thinking, as things are wont to do. Now, you need to understand a few things about my high school and about what I expected with this reunion. We had 700 kids in our class. The town I grew up in borders the city of Chicago, and when I was growing up, it was like Sesame Street in there; a very diverse community with people running the gamut from living in subsidized housing to living in mansions; about half the people lived in apartments, and there were so many different kinds of kids that you could fit in somewhere no matter what.

I don't think we realized the privilege that we had growing up in such a place at that time in history, before the apartments were converted to condos, before the tiny houses sold for too much money, when we could go bowling and go to the movies and go to diners that were open 24 hours and drink endless cups of coffee and smoke cigarettes and act bored, when we could just jump on the el and go anywhere, when there were clubs on the north side that were raw and real and catered to young people, when State street was closed to traffic and you could go down there with your boyfriend and look in the windows of the department stores and buy churros y chocolate from a street vendor and call it a date, when the beaches had no lifeguards and two piece bathing suits weren't even in style. Or maybe we did know it, because I at least, I and my friends and boyfriends, sure as hell took advantage of it and had a damn good time.

Normally, I suppose people who are approaching their 20 year reunion feel some trepidation; they might wonder what to wear, worry about how they would be remembered, think about how to put their best face forward in the crowd.

Not me, not Katy. Because of this--this forum, the things I have laid bare here--I knew that I could walk into the reunion in my pajamas, straight-up bald and looking like I was at death's door, and I would have received the same number of high fives, hugs that lasted a little longer than you might expect, fist bumps and smiles. Because of this, so many people I went to high school with know things about me that I might have otherwise wanted to hide. They know I have had a mastectomy, that I am in the middle of six months of chemo for the second time, and in spite of all of that even the guys just looked me in the eye as if that was all just immaterial. 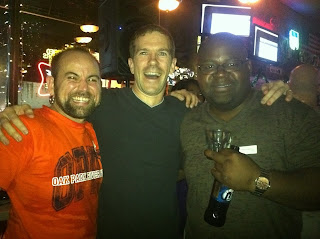 They know me, they know my husband even, and I got a lot of what I expected, and some things that took me by surprise. People told me they are praying for me. When people asked how I was doing or how I was holding up, it was hard to know if they meant the question in the normal way or the cancer way. Men I haven't seen since they were boys (and oh how the men looked different! with their beards and their baldness and the general manliness they didn't have at 17 or 18) told me I was an inspiration, that I should just keep doing what I was doing, keep soldiering on, that they enjoy, in a strange way, reading what I have to say. Women who looked remarkably the same as they did 20 years ago told me they read every word I write. People said that I look great, and I knew that meant a bunch of things, not just that I'm still in shape and don't look terribly old but that I was here, that I was alive. Someone told me "I'm glad you made it. I mean, I'm glad you made it here to the reunion, but I'm just glad you made it in every sense of the word." When Gabe walked in the room, people knew him and loved him, simply based on what they read about him here. Before the reunion, I hung out with a group of women who have supported me fully through all of this; one of them took pictures of me before I lost my hair, another was on her way to my house with a pie last weekend when I went into the emergency room. After we got home, Gabe said about them, yeah, those girls have got your back. 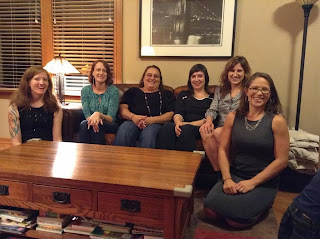 And it made me realize that people who haven't seen me in decades are genuinely happy that I'm not dead. It made me think about the fact that others aren't so lucky; several of my classmates have died. A boy I dated in junior high school is serving a prolonged prison sentence. Not everyone could be there; not everyone made it, in all the different senses of those words. And yet, here some of us were, sitting in a football stadium the night before the reunion, marveling at the existence of the lights and the marching band, neither of which existed when we were there, and feeling like time had passed and it had not passed. I went to that game with my whole family, and I sat next to a girl who was one of my oldest childhood friends; she lived across the street from me. I chatted for a while with a guy I went on a single date with right before we both left for college. I posed for pictures and people laughed at my loud-ass son. 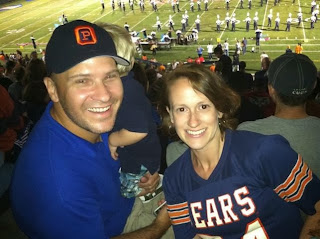 At the reunion itself, I realized there were all kinds of people I didn't remember, or didn't recognize. I didn't bother to make my way through the crowd to talk to everyone, and I didn't pretend to know people I simply didn't know. And yet at times someone would say, well do you remember so and so, and I would say, of course--we went to kindergarten together, and then I would think, SHIT--kindergarten. I talked to a man who asked me what I did for a living and when I told him I study payment systems he laughed and said, well, of course, you were always crazy smart, and I'm glad you did something with that. The random memories flowed with the alcohol everyone else was drinking; I stood around in my jeans and cowboy boots nursing a single ginger ale. At a friend's house before the reunion, her husband asked why I couldn't drink and she said in full earshot of her little kids, "because of the fucking cancer." I talked with a man and his wife about our kids and where we lived and all of that and after a while he said, Katy Jacob, I will always remember you as being one of my first dates. And he started telling his wife that we went to the movies and his parents drove us there, and she thought that was adorable. I had to bring up the time when we ditched class together to go fool around in an abandoned stairwell somewhere, and we were laughing about our 9th grade hijinks. Then he said, well thank you for those memories, Katy. We weren't so hard on each other, and that was good, wasn't it?

This conversation made me think of something, which I told my husband at home. I told him about the stairwell, and how this boy undid my bra and was feeling me up and said, I hope my hands aren't too cold, and I said the following, when any normal girl would have been batting her eyelashes or playing innocent or just generally doing the normal girl stuff: "Naw man, I'd tell you if they were." As Gabe started doing the same thing with my bra and the hands, he laughed at me and said, you would say something like that--you sure as hell would. And then I said to him, what are you trying to do? Get to half of second base? To which he laughed even harder and said, damn Katy, you are still the same girl.

And that's it, isn't it? We think time has changed us, we can't imagine the youth we had then, nor the old age we hope to have later, but maybe we are all still the same, and that's why we enjoyed seeing each other so much after all these years. Maybe I'm still that girl--the one with the unruly hair, the smart and smart-ass one, the one who never really knew how a girl was supposed to behave, the one who never had an effective filter for her mouth, the one who was a goofy irreverent recovering tomboy who wrote poetry and won the writing awards. Maybe that's why there isn't a single person I went to high school with who is put off by this blog the way that some of the friends I have met in adulthood are put off; it's because I seem like myself here, the way I was then.

Thank you for the memories. That's it--that's why we are so comfortable with ourselves, and with each other, despite time and circumstance and adversity and all of it. Because we remember when we were kids, and we now know something we couldn't know then. What we know in our hearts now that was only a glimmer in our eyes then can be seen in a way in this picture of me at our graduation. We know that we should not be nostalgic for the past, but happy for the memories we have made, and we also know that we should look happily towards the future, towards the next 20 years with whatever the passing of time brings to us, because we are lucky to have that prospect of things to come, and the possibility of making more memories that are ours alone to keep. 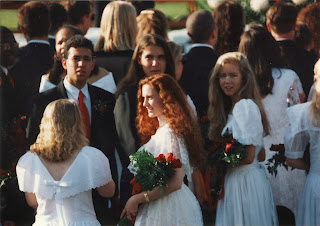